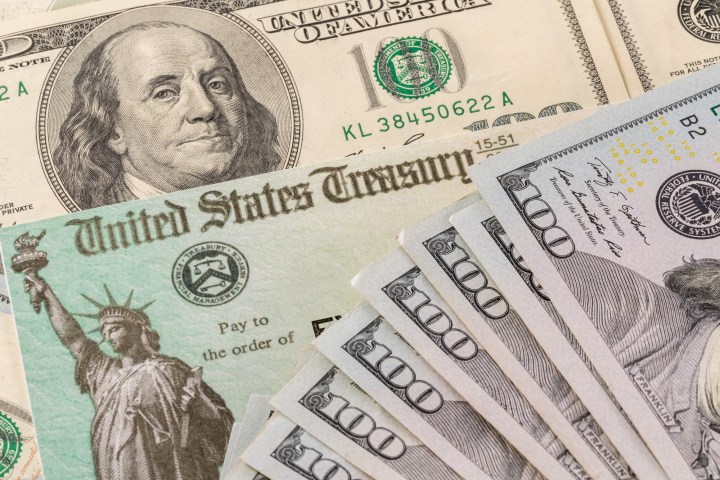 With all of this discussion around the Federal Stimulus checks, I’m having trouble determining where the earning limits came from. It seems like most limits for government aid revolve around multiples of the Federal Poverty Guidelines, though these payments do not appear related to these amounts.

If you made more than that as an individual or part of a couple, respectively, your direct payment decreased.

It’s a threshold that many Democrats are still advocating for in a possible third round of payments, although Biden and Senate Democrats now support these checks phasing out sooner for those who make above that amount.

In the early days of the pandemic, The Hill reported that GOP senators modeled the stimulus checks on the direct payments distributed to people during the Great Recession.

As for how the Bush administration landed on those limits? There’s an almost 30-year history behind these figures.

The $75,000-income level emerged as a benchmark for relief payments during discussions over child tax credits in the 1990s, according to Mark Prater, who served as chief tax counsel for the Republican staff of the Senate Finance Committee from 1993 to 2018, and as its deputy staff director from 2007 to 2018.

In 1994, Republicans spearheaded a legislative agenda known as Contract with America that would include a $500-per-child tax credit for families. A tax credit is a reduction of the taxes you owe, as opposed to a deduction, which is a reduction of your amount of income subject to taxes.

Just like the stimulus check debates, there was conflict over which income groups should receive them. Although many House Republicans wanted it to go to those making less than $200,000, nearly half argued that limit was too high.

Meanwhile, President Bill Clinton proposed that it should go to families earning less than $60,000, phasing out for those who made up to $75,000. At the time, the Clinton administration said that 61% of American households earned less than $75,000.

Breaking with the House and somewhat hewing to Clinton’s proposal, Senate Republicans ended up passing their own measure with phaseouts that would begin at $75,000 for single parents and $110,000 for couples.

“At that time, that was thought to be the bounds of where upper middle-income folks were,” said Prater, who is now managing director of PriceWaterhouseCoopers’ Tax Policy Services group.  “Clearly they did not want to do it for, at least in the Senate, high-income folks. And they wanted to target it to middle-income and lower-income families.”

A 1995 article from the New York Times also noted that “the lower caps were meant to help rebut charges by Democrats that the Republicans’ tax plans favored the well-to-do.”

Although Clinton ultimately vetoed the bill, he would later approve the Taxpayer Relief Act of 1997, which included child tax credits that did phase out for single parents with an annual income above $75,000 and couples making above $110,000.

According to the Economic Policy Institute, these credits had “broad partisan support.”

How phaseouts are determined

The 2008 stimulus payments were built on these requirements, and also reflected other measures like the 2001 Economic Growth and Tax Reconciliation Act, which included actual direct payments.

Prater thinks this was a gesture to some of the tax penalties that married couples receive — a recognition, by policymakers, to ensure that a couple was treated as two single people.

Under the tax code, married couples who make similar amounts may end up having to pay more than they would if they were two single individuals.

For the COVID-19 phaseout rate, those checks were reduced by $5 for every additional $100 in income you made above the threshold. The cutoff was lower in the second round because the amount was lower. When the first check totaled $1,200, you were ineligible for any amount if you were an individual making more than $99,000, and you were ineligible for any portion of the second $600 check if you were making more than $87,000.

A 5% phaseout has become standard with these tax credits. Under the 1997 Taxpayer Relief Act, the phaseout reduced the credit by $50 for every $1,000 you made above the threshold.

Prater and Howard Gleckman, a senior fellow at the Urban-Brookings Tax Policy Center, explained that this is to avoid what’s known as “cliffs.”

Gleckman said the point is to phase payments out in such a way that it doesn’t change people’s behavior.

However, Biden and Senate Democrats are now backing a plan that would deviate from this formula for the next round of checks in order to appease moderate members of the party. (Democratic Senator Joe Manchin was recently pushing for the threshold to be even lower at $50,000.) The full payment would still go to individuals who make less than $75,000, but they would end for those who earn above $80,000. Couples who earn above $160,000 would also be excluded.

In comparison, like reader Tucker Whitesides pointed out, many government aid programs are based on federal poverty guidelines. For example, to qualify for the Supplemental Nutrition Assistance Program (formerly known as the Food Stamp Program), your monthly household income generally has to be at or below 130% of the federal poverty line.

“The government doesn’t really have a single consistent formula for providing assistance,” Gleckman said. “Even in the tax code, there are different subsidy levels for the child tax credit than there are for the earned income tax credit.”

He added that in crises like the pandemic, there is no perfect equation to figure out how to distribute checks. Hence the constant disagreement. The numbers politicians choose tend to reflect who they think falls in the middle class: a nebulous term that can be interpreted based on factors like where you live or the size of your family.

“This is not the same as saying you really should get two doses of the Pfizer vaccine because we’ve done scientific experiments,” Gleckman said. “With this, it’s a case of rough justice you’re making. You’re making a kind of guess of who needs this the most — relative to how much the government wants to spend.”