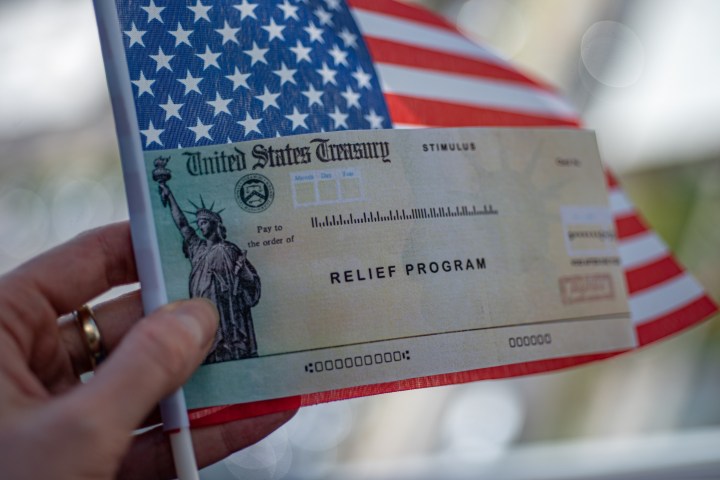 House Democrats released a proposal this week for COVID-19 relief that would include distributing $1,400 checks to American households. Evgenia Parajanian/Getty Images
COVID-19

House Democrats released a proposal this week for COVID-19 relief that would include distributing $1,400 checks to American households. Evgenia Parajanian/Getty Images

As part of a new COVID-19 relief package, Democrats are pushing for Americans to receive a third round of stimulus payments.

The bill includes new checks, expanded unemployment benefits through August and health care subsidies for unemployed Americans, among other benefits.

Democrats and Republicans have disagreed over how much money Americans should receive and who should be eligible, although members from both parties have supported a third check in some form.

A new set of checks would provide much-needed relief to Americans as economic conditions remain bleak. There are 10 million fewer jobs than there were prior to the pandemic, while the unemployment rate stands at 6.4% (double the rate a year ago).

Here are the latest details about the next round of direct payments.

How much could you receive?

On Monday, House Democrats released a proposal for COVID-19 relief that would include distributing $1,400 checks to American households.

The income thresholds remain the same as the first two sets of payments. Individuals making up to $75,000 and couples making up to $150,000 will receive the full amount. However, payments will phase out more quickly compared to the previous checks, with payment amounts decreasing for individuals who make from $75,000 up to $100,000, and joint filers who make from $150,000 up to $200,000.

Ahead of Georgia’s runoff elections, Democrats campaigned on sending out $2,000 checks. That amount includes the $600 approved by Congress in December. The $1,400 payments proposed by Democrats is the remainder of the $2,000 total.

And if you didn’t receive the first two stimulus checks because your income was too high in 2018 and 2019, you’ll be eligible for those previous direct payments based on your 2020 income if you meet the requirements.

“Anybody who didn’t receive their initial stimulus payments should file a 2020 tax return in order to claim their payments from March and December last year,” Kris Cox, deputy director of federal tax policy at the Center on Budget and Policy Priorities, told Marketplace.

What hurdles are left to getting them?

Lawmakers in both parties have opposed the eligibility requirements for the next round of stimulus, calling for lower income thresholds.

Sen. Susan Collins, a Republican from Maine, and Sen. Joe Manchin, a conservative Democrat from West Virginia, spearheaded a proposal that would phase out checks beginning at $50,000 for individuals and $100,000 for joint filers.

However, Democratic Sen. Bernie Sanders of Vermont has criticized these caps, tweeting that “telling a worker making $52,000 a year that they’re ‘too rich’ to get the full $2,000 in direct relief is totally absurd.”

John Hudak from the Brookings Institution said that while there’s been disagreement, he thinks the thresholds House Democrats have set (i.e., the full amount for individuals making $75,000 and joint filers making $150,000) will prevail.

“It’s going to be very difficult for Democrats to hand their new president a glaring defeat on his first major legislative effort,” said Hudak, who’s a deputy director at the institute’s Center for Effective Public Management.

Hudak added that Manchin’s situation is an “excellent” reason why this bill will ultimately pass. While the congressman isn’t going to support all aspects of it, Hudak pointed out that Manchin is from West Virginia — a state that’s economically hurting for reasons both related and unrelated to COVID-19.

“This is the type of relief that will really help the residents of West Virginia,” Hudak said. “And he knows that for him to stand up and cast a vote that ultimately would prevent that relief from going to any American, especially West Virginians, probably becomes too difficult of a vote for Joe Manchin to cast.”

When would you get them?

Democrats want to pass the entire COVID-19 relief package into law by mid-March. Hudak thinks that timeline is pretty optimistic, but not impossible.

But whenever the package is passed, Francine Lipman, a law professor at the University of Nevada, Las Vegas, said she thinks you’ll get a payment within a couple of weeks if it’s based on your 2019 income.

According to Democrats’ plan, the payment would be based on either 2019 or 2020 income returns.

“The Treasury has gotten a lot better with these [checks]. If you can remember the first one, it did kind of take them some time,” Lipman said. “But the second one they sure did push out fast.”

However, Lipman said the payment may take a little longer if it’s based on 2020 income.

“Once your 2020 return is processed, then it might take a couple of weeks after that,” she noted.

We are also in tax season, but Lipman said she thinks the IRS will still try to speed up check distribution.

Will this be the end of stimulus checks during the crisis?

Hudak said he thinks everyone in Congress wants this to be the last round of stimulus checks.

But this might not be the final payment, and Democrats understand that, he said.

“If this does not jump-start the economy, if something happens in the public health space that we don’t anticipate, or if something else happens economically related or unrelated to COVID, and we continue to slide in the recession, then there’s going to be a strong argument for another round of help,” Hudak said.