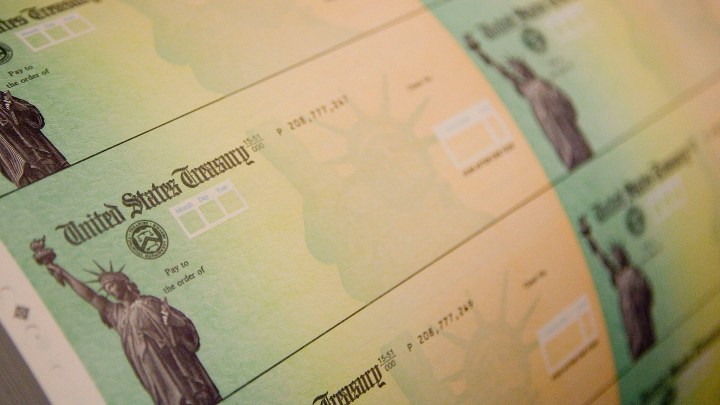 COPY
Getting checks out to Americans who are already in the IRS’ system should be quick this time around. Jeff Fusco/Getty Images
COVID-19

Getting checks out to Americans who are already in the IRS’ system should be quick this time around. Jeff Fusco/Getty Images
Listen Now

The new pandemic relief bill includes another round of “economic impact payments” to Americans. The plan proposes $600 for an individual, $1,200 for a family — half as much as under the CARES Act last spring.

Each child under 17 would get $600 — it was $500 last time. The payments would start to phase out for folks earning more than $75,000 a year and $150,000 a year for a family. And, U.S. citizens married to undocumented immigrants or those without a green card would be eligible this time around.

That money could start flowing soon.

Getting checks out to Americans who are already in the IRS’ system should be quick this time around, said Kyle Pomerleau at the American Enterprise Institute.

“The advantage of a second time is that you’ve learned all your lessons, you have all the infrastructure in place — especially for those that have already received one round, because the information is already there,” Pomerleau said.

That’ll be crucial to keep the recovery going, said John Leer at Morning Consult. He pointed out that as the economy was tanking last spring, the arrival of relief checks revived consumer confidence.

“So I would expect a similar phenomenon this time around,” Leer said. “People are losing pay and income, so it’s impossible to overstate just how important it is to have this stimulus money hitting the economy right now.”

Pomerleau predicted that more than 8 in 10 American households could get a check.