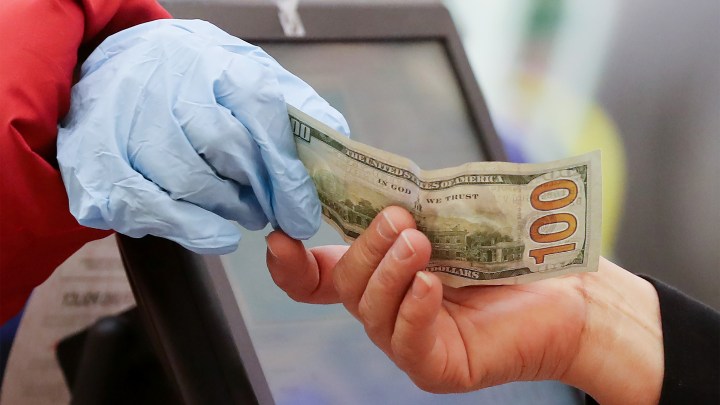 COPY
Some people are donating stimulus checks while others are using it for essentials. Mario Tama/Getty Images
COVID-19

Some people are donating stimulus checks while others are using it for essentials. Mario Tama/Getty Images
Listen Now

The federal government is taking all sorts of measures to prop up the economy — more money for unemployment insurance, loans that are supposed to go to struggling small businesses, student debt relief and those relief payments of up to $1,200 for most people.

Some folks received them by direct deposit a few weeks ago, while others started getting paper checks in the last week or so. And others are still waiting. We checked in to see how people are spending their payments.

“Every time we’ve seen a wave of other stimulus checks hitting, we’ve seen people paying their friends back, friends and family clearly being the safety net for many, many people here,” Sopp said.

That was especially true of the earliest direct deposits. Now, with other types of stimulus coming through the pipeline, Sopp said more people are catching up on other expenses.

“We see a round of bill pay. So people paying their bills, and also auto loans or auto lease is being paid almost immediately,” Sopp said.

That’s what Lauren Howie in Cleveland did. She received the full $1,200.

“I made a list of things I needed to take care of. So, medical bills and the last chunk of my car loan,” she said. Howie is still working, so the money was a windfall for her. “I did feel a little bad about not putting it into the economy because we needed so badly. But yeah, those bills weren’t going anywhere.”

Lots of people who shared their stories said they donated their checks to charities. Many others, like Mike Foster in Marietta, Georgia, were torn.

“My first instinct was to donate it,” Foster said. He’s relatively new in his sales job at a software company and is already taking a 20% pay cut due to COVID-19. “My job is great right now, but let’s say a month from now I lose it — that $1,200 is four months worth of groceries.”

So for now, Foster is keeping the money in his savings account, just in case.