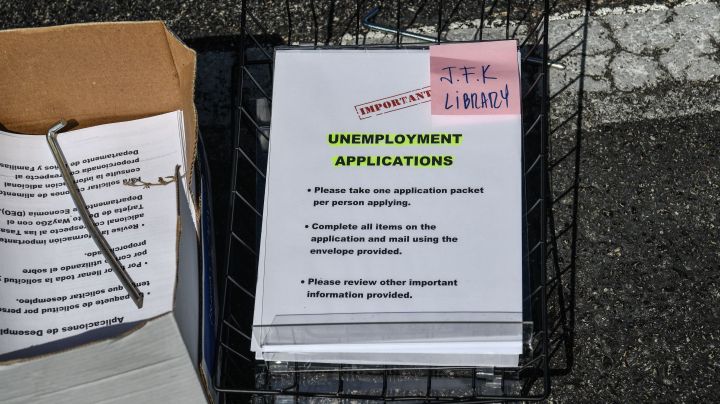 COPY
Any monthly jobs report can be dizzying. The one for January is a little more so. Chandan Khanna/AFP via Getty Images
COVID & Unemployment

Any monthly jobs report can be dizzying. The one for January is a little more so. Chandan Khanna/AFP via Getty Images
Listen Now

We are 17 days into a new presidential administration, 36 days into a new year and roughly 334 days (11 months, counting from the second week of March) into the worst pandemic and worst recession in most of our living memories.

And this is where we have gotten to, care of the January jobs report, which came out Friday:

Forty-nine thousand jobs added to the economy, only marginally better than the month before. At least we were gaining jobs again, but we’re still nearly 10 million jobs underwater from last February. Unemployment at 6.4%, still nearly double where we were a year ago. Jobs still being lost in some of the hardest-hit sectors, like bars and restaurants and tourism and retail, but also in sectors that were recovering better, like health care and manufacturing and construction.

So, we have a long way to go to get back to something resembling a normal or healthy economy again.

There are a lot of numbers in a monthly jobs report — it’s kind of dizzying. So we asked three economists who chewed the jobs data over to pick just one indicator that shows where the economy is, 11 months into the pandemic.

One number that “slams you between the eyes.”

“Twelve and a half million,” said Curt Long, chief economist at the National Association of Federally-Insured Credit Unions. He’s referring to the total number of jobs we’re in the hole since the pandemic hit.

And, he reckons, it would have added another 2½ million jobs, jobs needed to keep up with population growth, for new high school and college grads, immigrants, new parents returning to work. “Twelve and a half million jobs — that’s an enormous deficit, of course. And at the pace we’re going, it’s just not nearly fast enough to eat into that.”

The number that slams Elise Gould at the Economic Policy Institute between the eyes: 3.9 million.

That’s how many jobs we are still missing in the hard-hit, and often poorly paid, leisure and hospitality sector. “People who don’t have an adequate safety net because their wages have been low for so long,” Gould said.

Now, let’s talk about unemployment. Officially, that’s 10 million Americans who don’t have a job and are actively looking, but Mark Hamrick at Bankrate said that doesn’t count a lot of people who are not working because of COVID-19 danger or child care needs.

“So, we have another 13 million who either are out of the labor force and want to work or who are underemployed working part time, would like to have full-time work,” he said.

Add ’em up, he pegs the total unemployed at about 23 million — that’s about 1 in 7 Americans who had a job before the pandemic started.