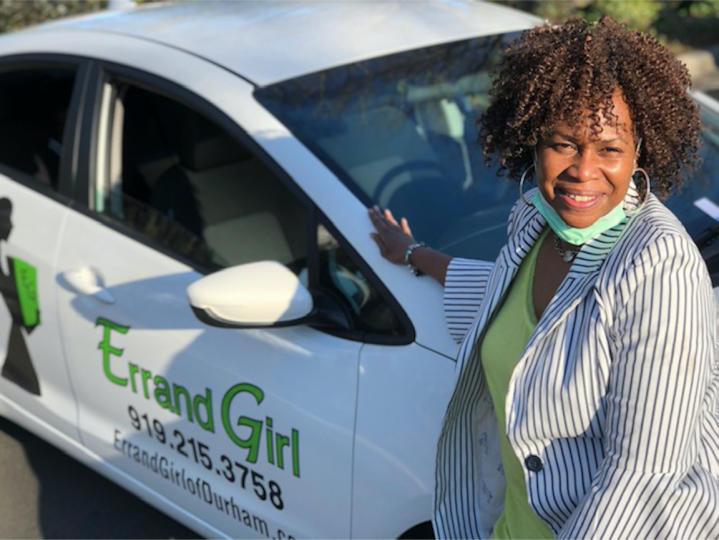 Some big corporations — think Amazon or Walmart — have done just fine in the pandemic, even if it meant adjusting their business plans. But some smaller businesses have had to be similarly nimble with far fewer resources.

One small Black-owned business in North Carolina was able to survive by starting to run errands people didn’t have time to run.

That’s why it’s hard to catch up with Tina Travis, the founder of Errand Girl of Durham, who spends a lot of time driving around town, picking up and dropping off. Recently, her precious cargo was seven-year-old Nicholas Eke, the son of one of her clients.

“OK, hand sanitizer? Got our seat belts on?” Travis asked him. “Ready to hear your favorite song?”

Travis started Errand Girl, a concierge service, more than a decade ago, running errands for a neighbor who was homebound after surgery.

“We fill in the nooks and crannies of life. We’re like a nice reliable sweet neighbor,” said Travis. “The only thing about it, we have national background checks and we’re superlative drivers.”

Travis used to rely heavily on a big contract with an airport. Once the pandemic started, she had to do smaller jobs, everything from delivering birthday gifts to ferrying children to and from school.

More than 40% of Black-owned businesses disappeared early in the pandemic.

“I think entrepreneurs like her, who have moved very quickly to adjust, have thrived,” said Vickie Gibbs, executive director of the Entrepreneurship Center at UNC Chapel Hill’s Kenan-Flagler Business School. “And those that have leveraged technology to interact effectively with their clientele, they have also thrived.”

It hasn’t been easy to thrive in these times. Gibbs said many businesses owned by women and people of color didn’t have the same access to federal PPP loans as larger businesses. And she said they also often didn’t have the luxury of a bookkeeper or accountant.

Travis said she received less than $7,000 in the first round of PPP which allowed her to keep her four employees, meaning they could continue to help people like Chinelo Eke, Nicholas’ mom.

“I must say that since she’s been providing the service for Nicholas, she has not for one day disappointed, not at all,” said Eke.

According to Travis, talks are underway to expand Errand Girl to other cities.