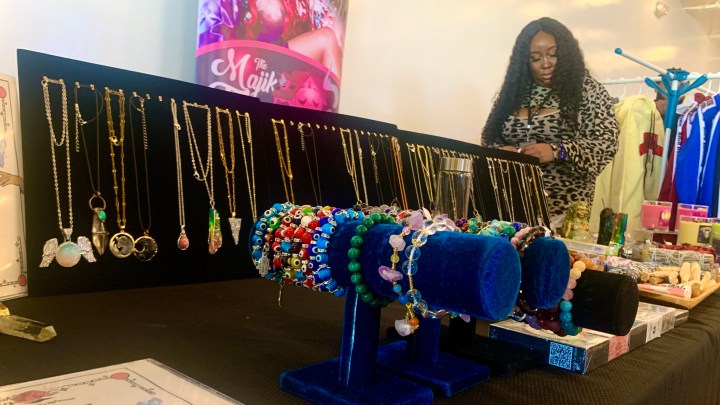 The Black Market, a monthly pop-up venue for Black-owned businesses in Nashville, Tennessee, started because its founders found the cost of a physical store too high.

“So what we did was start the market,” said co-founder Carlos Partee, who owns the brand Cashville, which sells T-shirts and hats. “We started off with 15 vendors, and it’s grown ever since then.”

In the first 15 months of the pandemic, people nationwide started their own businesses in record-high numbers. That included a lot of people in the Black community. In Nashville, the local pop-up market is providing a physical space for Black-owned businesses to sell their products and services.

Since starting, Partee said, the market has hosted almost a dozen events around the city with close to 500 vendors who brought in a total of half a million dollars.

At a market early this year, Majik Trap owner Karii Jones showed customers her incense, oils and crystals. Back in 2020, Jones couldn’t find a local Black-owned business that sold crystals. So, she decided to start her own.

“I’m very adamant about circulating the Black dollar,” she said. “And to support our community and the people that live in the community with us.”

For now, she’s working full time in customer service and running her business on the side. Eventually, she’d like Majik Trap to be her main focus.

Nationwide, Black owners accounted for 26% of new online microbusinesses during the pandemic, according to the Brookings Institution — up from 15% before the pandemic. Most have fewer than 10 employees.

In 2019, Brookings reported that Black-owned businesses made up fewer than 3% of businesses in the country.

Partee wants to find ways to build on the momentum locally. “If we have one event once a month and it’s impactful,” he said, “how can we do two events?”

Since its launch, the Black Market’s owners have made $88,000, he said. The co-founders are now aiming to get a permanent space where Black business owners can sell their products.

“Be able to show, ‘Hey, you can make money,’” Partee said. “But also we’re trying to figure out ways to create this retail space to where that we can showcase our vendors.”

That’s something the Nashville Black Chamber of Commerce already offers its members. Carolyn Waller is the president of the organization.

She said for the chamber to endorse a business, it needs to prove it can bring in consistent sales over several years. “That they’re able to produce based on longevity with their businesses and they’re operational,” she said.