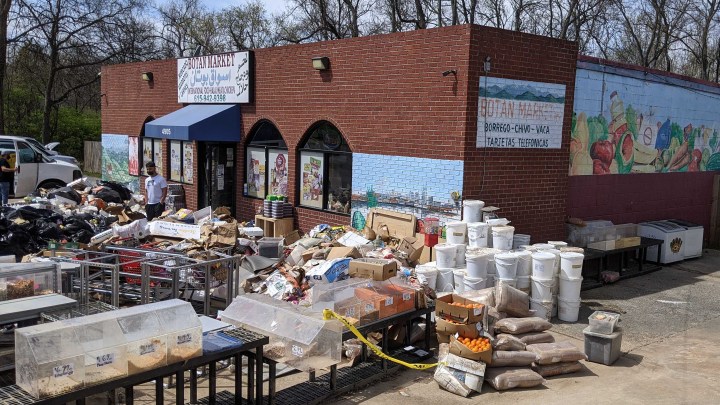 Nashville, Tennessee, saw bad flooding in late March. One hard-hit neighborhood is home to a large immigrant community. A small Kurdish market there lost hundreds of thousands of dollars in inventory. But community support is helping Botan Market get up and running again.

Shortly after the flood, the path leading to the front door of the family-owned business was lined with more than $300,000 worth of inventory, piled up in trash bags, sitting in puddles of mud. The owners said they did not have flood insurance.

“Putting all that product into these trash bags and then just piling it out here, it’s like a punch in the gut,” said Zindan Berwary, a close friend of the family that owns the shop. That hit was especially hard with the Muslim holy month of Ramadan just around the corner.

Evin Tovi, one of the owners, said that during Ramadan, the market makes about four times what it would in a regular month. “That’s where we make our money, and now it’s gone.”

But then the support poured in — and not just from Nashville’s Kurdish community, which is the largest in the country. People across the city donated their time and more than $11,000 via an online fundraiser.

As a result, Helan Tovi, whose family owns the business, said they were able to reopen less than a month after the flooding — and in time to salvage the latter part of the busy season. “It’s honestly a blessing,” she said. “It honestly makes me emotional to know that there’s people out here helping and that there’s people that care.”

Customers are grateful to have the market back too. Ihsan Tunceren, originally from Turkey, said he’s been a loyal shopper for three years. “Everything I can find in my country, I can find it here.” But, Tunceren said, the thing that keeps him coming back to the market is the kindness of the people who operate it.

The owners still have tough decisions ahead, like whether to move the market to a new location or lift the building up to avoid more flood damage in the future.

But for now, they’re focusing on the immediate: waiting for more stock to come in, a new sink, a permanent cash register. They’re putting the family business back together one piece at a time.