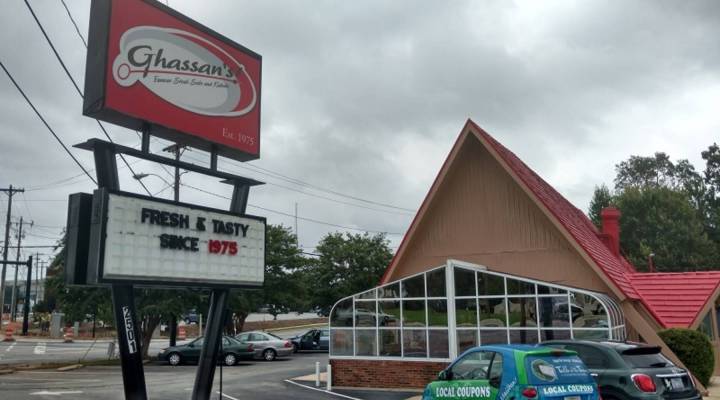 COPY
Ghassan's, a quick service Mediterranean restaurant in Greensboro, NC. Operations Manager Ziad Fleihan said the restaurant has lost $20,000 in revenue since the North Carolina General Assembly passed HB2, and a series of events were cancelled in the city.   Jeff Tiberii/WUNC

Ghassan's, a quick service Mediterranean restaurant in Greensboro, NC. Operations Manager Ziad Fleihan said the restaurant has lost $20,000 in revenue since the North Carolina General Assembly passed HB2, and a series of events were cancelled in the city.   Jeff Tiberii/WUNC
Listen Now

On a recent weekday afternoon at Ghassan’s in Greensboro, North Carolina, meat hits the grill and French fries drop into hot oil. The lunch spot has several locations, and a food truck, in this city of about 270,000 people.

“We’re a quick service Mediterranean restaurant. One of our biggest and most popular items is the steak and cheese sub,” said Operations Manager Ziad Fleihan.  His mom and dad started the business 41 years ago.

While this location was busy with a steady lunchtime crowd, another of the Ghassan’s spot has not fared well recently. Seven months ago North Carolina lawmakers passed the so-called “bathroom bill,” that requires transgender people to use public bathrooms based on the sex that’s their birth certificate. Republicans said this new law is about protecting women and children along with state power. But House Bill 2, or HB2, has delivered unintended economic consequences – big and small. Major sporting events relocated, some companies halted job expansion efforts, and that has affected some small local businesses. One of the Ghassan’s locations is a block away from the Greensboro Coliseum.

“That is a lower volume store for us, so we’re largely dependent on events that come to the coliseum and tourism and people that come to this area,” said Fleihan.

Ziad Fleihan is Operations Manager at Ghassan’s, a restaurant his parents started in 1975. He says one location, near the Greensboro Coliseum, has lost $20,000 because of cancellations related to House Bill 2.

Between a canceled Bruce Springsteen concert and six conferences that were called off, that restaurant has already lost $20,000 in revenue, Fleihan said. NCAA March Madness basketball was supposed to take place here next spring. It will not.

“It makes us reassess and think about, you know, if this thing doesn’t get repealed how long can we last here and when is it time to maybe make hard decisions as far as closing up shop,” he said.

Along with vanished revenue at restaurants and hotels, the cancellation of events has hit caterers, transportation services, linen rental shops, pesticide companies, even banks and credit unions that handle payroll for many of these contractors.

“It certainly tarnished us. We have worked very hard to establish a brand in the sports market, for one. And I feel that has just deteriorated,” said Henri Fourrier, President of Greensboro area Convention and Visitors Bureau.  He described the controversial new law as having a ripple effect through the local economy.

Fourrier believes it’s just a matter of time before something is done. Change could come from the legislature, or the courts, but nothing is imminent.

And the law isn’t affecting all businesses across the state in the same way. About 50 miles east is the Raleigh-Durham-Chapel Hill region, called the Triangle. Following passage of the measure, Deutche Bank halted job expansion plans, and the NCAA relocated several sporting events. Tina Travis is small business owner in the Triangle. She started Errand Girl, a concierge service, in 2009.

“It’s not a crippling blow to the business,” she said in her Durham office. Travis has talked to other small business owners in her area in the past few months.
“We all get together at the end of our quarters and say ‘How did you do?’ ‘What are you doing different?”

Tina Travis started Errand Girl in 2009. Her concierge business is doing OK seven months after House Bill 2 was passed. However, the economic impact is something she continues to watch closely.

Travis estimated that ten to 15 percent of her business comes from out-of-town visitors and said her company is diverse enough in the services it offers that House Bill 2 — or HB2 — has not had a noticeable effect.

There hasn’t been a definitively study yet on how the law may have affected the economy. So far, the stream of cancelled conferences, concerts and sporting events doesn’t seem to have affected the state’s unemployment rate, which actually dropped over the last few months. But even small losses can have large consequences for some local business owners.