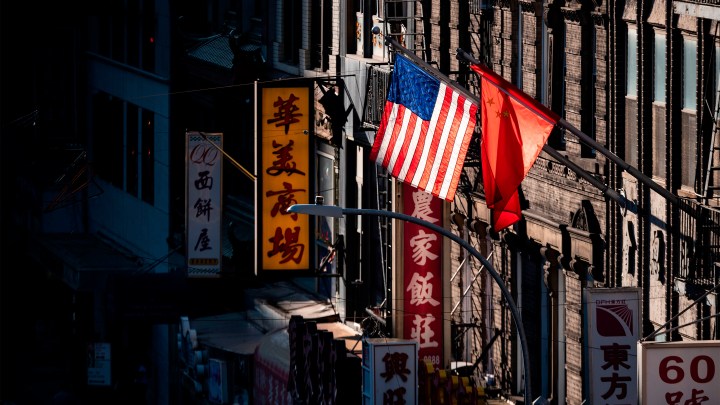 COPY
A view of New York's Chinatown in 2019. A study found that Asian-owned companies have been among the hardest hit economically by the pandemic. Johannes Eisele/AFP via Getty Images
COVID-19

A view of New York's Chinatown in 2019. A study found that Asian-owned companies have been among the hardest hit economically by the pandemic. Johannes Eisele/AFP via Getty Images
Listen Now

There’s more evidence that this pandemic is not affecting all businesses equally.

A new report from the JPMorgan Chase Institute found that while Black-owned businesses are facing the biggest drops in cash reserves due to the COVID-19 pandemic, Asian-owned businesses are close behind, with cash balances down 22% in April and revenue down more than 60%.

“Asian-owned businesses — their cash balances were also down more than 20%,” said Chi Mac, the small business research lead at the JPMorgan Chase Institute. “That’s certainly a much steeper decline than what we see across all small businesses.”

Not all communities track business ownership by race, so this analysis is limited to a few states. But it matches up with what Robert Fairlie, professor of economics at the University of California, Santa Cruz, is finding in his research — especially earlier in the pandemic.

“I found, for example, in April that 26% of Asian-owned businesses shut down during that month,” Fairlie said. “I also looked at this in May and found that 21% were also closed.”

For business owners overall, the drop was 15%. Some of that was just general business conditions when the pandemic hit. Khoa Le owns Kvibe Studios in New Jersey.

“Boom — I lost all my corporate contracts. Within about a two-week span, I lost close to over half a million dollars,” Le said.

But he acknowledges that in the early days, racism played a role for some Asian-owned businesses as well.

“My wife owns a nail salon, so when the salons were still open, people will go into the salon and say, ‘Hey, are you Chinese? Because if you are, I’m not gonna do business,’ ” Le said.

Now that nail salons are open again, he said people are lining up to get into his wife’s shop. And Le has pivoted to more virtual video sessions and said his corporate clients are starting to come back.