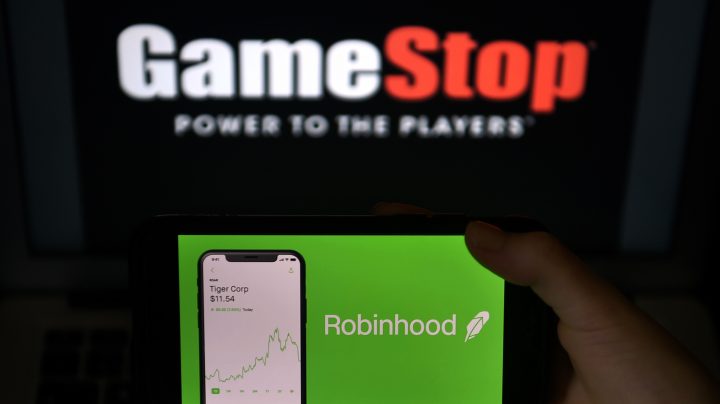 GameStop, the video game retailer, has had a rollercoaster month, with its stock price rising more than 8,000% at one point.

However, its share price, which hit a high of $347 last week, is finally starting to drop and opened at about $91 on Thursday.

The battle between Wall Street hedge funds and Redditors — which has even commanded attention from the presidential administration —  has generated a lot of questions about the nature of stocks themselves.

Several of our readers wrote in with questions about how this event could impact the average American and the purpose of short selling. Here are some of the ones we’ve unpacked:

Most experts say GameStop stock value will eventually drop back to the company’s productive value, but Bitcoin has stayed high for years despite having no productive value. So what’s stopping a meme stonk from simply becoming a fiat investment like Bitcoin, completely disconnected from any production? — Bert Nixon, from Atlanta, Georgia

While a company’s stock price may be inflated and completely divorced from how that business is performing, the stock itself is still very real, meaning that you are buying ownership in a company.

So one of the key differences between the two is that as a company, GameStop can go out of business, said Kenneth Martin, a finance professor at New Mexico State University.

Under Chapter 7 bankruptcy, when a company sells all of its assets off, the stock of a company usually becomes worthless, according to the U.S. Securities and Exchange Commission.

Bitcoin however, is valuable because of its “scarcity, transparency, and extraordinary degree of security,” according to David Yermack, professor of finance and business at the New York University Stern School of Business.

“GameStop’s cycle of ascent and crash will probably be measured in weeks, if not days. There is too much smart money that will be bet against the day traders on Reddit, who lack the wealth and liquidity to keep GameStop’s price inflated,” Yermack said.

Personally, I am far, far away from hedge funds and even away from this Robinhood-kinds of investing methods. Will this fight bring my nest-egg in 401k down? If so, how? — Salil Joshi

It probably won’t. And that’s because the typical retirement fund is invested in a wide array of financial markets — not just stocks, but potentially bonds, commodities and real estate, according to Martin.

“So it’s much more diversified,” Martin said. “While [GameStop] is getting a lot of press and a lot of headlines, it’s a very, very small part of the overall stock market, much less all the financial markets.”

GameStop stocks and those like it may be owned in an Exchange Traded Fund or index fund, said Reena Aggarwal, a finance professor at Georgetown University. But in the long-run, a couple of stocks are not going to have a major impact on valuations. She also pointed out that the stock market does tend to go up, on average, which means you shouldn’t worry about your long-term portfolio.

Aggarwal and Martin both said that events like these might shake individual investors’ faith in the market and that it’s working against them or rigged.

Can a company actually be propped up just by a high market value even if it’s losing money on regular operations? — Gonzalo Perez, from Coral Springs, Florida

Aggarwal said there are many companies whose stock price is high, yet are actually losing money, because investors expect that the stock price reflects the future.

She said it’s also been the case for tech giants like Amazon, which Quartz said lost money for its first 17 straight quarters as a public company.

Companies can also take advantage of a high market value by deciding to issue more shares in order to raise additional capital.

Is short selling of stocks just exploiting the rules in order to make money without producing anything of value, or does it serve a useful economic purpose? — Jean Shepard, from Davis, California

In general, academics say that short selling is actually useful. As a quick reminder, short selling is when you borrow a certain number of shares from brokers (for a fee), then sell them at their current value. Once the share price goes down, you can buy them at the lower price and return them to the broker you borrowed from. You end up gaining the difference between the amount you sold them for and the lower price you paid when you bought them.

The reason why it’s perceived as useful is because it can correct overvalued stocks.

“For example, if there’s a market frenzy, and the price keeps going up and up, short sellers can come in and bring the price down to what they think the true value of the stock is,” Aggarwal said.

Basically, it’s classic supply and demand: If people are selling the stock, meaning more shares are now available, the price goes down (and vice versa).

Why aren’t stocks for companies that make nothing anymore like Blackberry just de-listed? — Lesley Evensen, from Berkeley, California

Like with GameStop, the share price for BlackBerry also experienced a surge because of the Reddit frenzy. The company, which once boasted iconic work phones, eventually lost out on smartphone market share to the likes of Apple

But according to requirements from the New York Stock Exchange, you’re faced with a delisting if your company’s stock is less than $1 a day over a consecutive 30-day trading period.

This has never happened to BlackBerry. Its stock price, which hit more than $25 a share about a week ago, is currently above $11 — higher than the NYSE minimum.

After the recent restrictions by Robinhood, TD Ameritrade etc. on stocks like GameStop and AMC, it made me wonder: are brokerage firms allowed to just not offer a stock if it’s publicly traded? — Byron Sakiadis, from Wilmington, Delaware

The terms of service agreements of companies like Robinhood say that if you use the service, they have the power to prohibit or restrict trading.

“The brokerage agreements do tend to allow the brokerage firm a fair bit of flexibility,” said Chester Spatt, a finance professor at Carnegie Mellon University.

Here’s what happened in GameStop’s case last week: Brokerages like Robinhood Securities work with clearinghouses that stand between buyers and sellers, and manage risk to the market if one side of the deal defaults and doesn’t pay up.

The clearinghouse started asking for collateral from brokerages like Robinhood to back up those risky bets in case they went bad, which is why Robinhood temporarily banned purchases.

“It was not because we wanted to stop people from buying these stocks,” Robinhood stated in a blog post. ”We did this because the required amount we had to deposit with the clearinghouse was so large—with individual volatile securities accounting for hundreds of millions of dollars in deposit requirements—that we had to take steps to limit buying in those volatile securities to ensure we could comfortably meet our requirements.”

Some Democratic lawmakers are now calling for these apps to be regulated, while the SEC said that it’s going to look into the issue. “We will act to protect retail investors when the facts demonstrate abusive or manipulative trading activity that is prohibited by the federal securities laws,” the SEC said in a statement.

However, since the frenzy started, Robinhood has been able to raise $3.4 billion to handle its collateral requirements. According to the Wall Street Journal, people familiar with matter say this cash should help Robinhood ease many of the trading restrictions it had in place. This week, Robinhood upped the purchasing limit for GameStop stock to 100 shares.