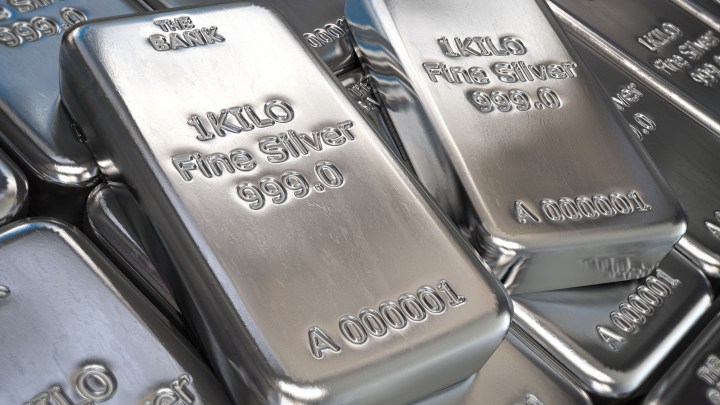 COPY
Retail investors are now targeting big banks who have bet against the price of silver. Bet_Noire via Getty Images

Retail investors are now targeting big banks who have bet against the price of silver. Bet_Noire via Getty Images
Listen Now

Is silver the new GameStop? Prices for the commodity rose to an eight-year high in overseas markets overnight. Individual investors are apparently fueling that increase — the same type who embraced GameStop lately.

Among their goals is to make money by wrong-footing the investment pros.

But why silver this time around?

The talk in online forums is that a lot of big banks hold short positions on silver, meaning they’re betting the price will go down. So retail investors appear to be trying to do what they did with GameStop: Drive up silver’s price to hurt the big market participants. This time, however, it’s big banks, while with GameStop individual investors were targeting hedge funds.

Will the strategy work?

The price of silver is rising, but analysts are skeptical. Big banks have far greater assets than hedge funds, so it’s a little bit of comparing apples to oranges.

Also, banks might own silver too, not just short positions on the commodity. So if the price of silver continues to rise, that could actually benefit the banks, too.

Silver is a commodity, not a stock like GameStop shares. Does that make a difference?

It does. When you buy silver, there has to be a physical bar held somewhere. Now, retail investors are targeting exchange traded funds, too, which means they’re trading in silver the way you would in stock, as a security of sorts, without having to actually buy silver bars. That can move up prices in the short term, and Monday’s trades have indeed resulted in significant price swings of the precious metal.

But could that transfer into broader effects on the global economy? In the long term, analysts are still skeptical because there is just a lot of silver out there. It’s a huge market with plenty of buyers and sellers.

In an interview with the BBC’s Victoria Craig on the global edition of the “Marketplace Morning Report,” Financial Times commodities correspondent Henry Sanderson explained how widespread the use of silver is around the world.

“Silver is widely used in our economy today, you know, in electronics, and in particular in solar panels,” Sanderson said. “And, obviously, demand for solar is going to soar over the next few years with President Biden’s green stimulus, and the EU’s plans for green stimulus as well. So that could be broader effects.”

This isn’t the first attempted short squeeze on silver

Oil barons William Herbert Hunt and Nelson Bunker Hunt back in 1979-80 bought up a whole bunch of the precious metal — investments worth more than $15 billion, about 400 million ounces of silver — in a similar move, “but, ultimately, it was futile,” Sanderson said.

“You know, prices plummeted in 1980,” he said. “And they faced a class action lawsuit and a lot of other proceedings. So it’s not an easy strategy to pull off.”