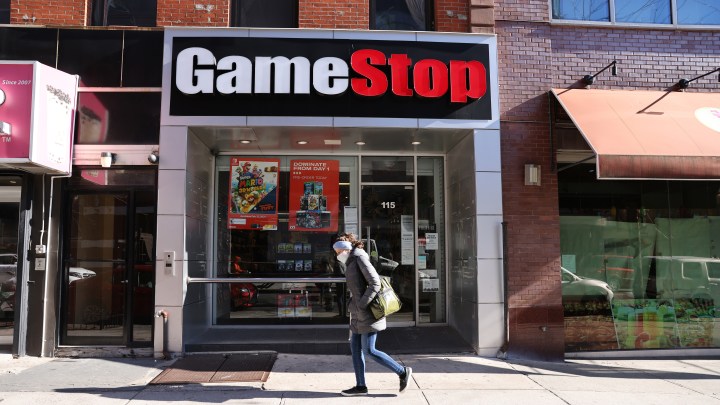 A coordinated effort from Redditors to buy GameStop stock threw the market into a tizzy this week. Spencer Platt/Getty Images

A coordinated effort from Redditors to buy GameStop stock threw the market into a tizzy this week. Spencer Platt/Getty Images

The online community of day traders came together to throw a $5 billion wrench in the plans of Wall Street hedge funds trying to “short” GameStop stock. Shorting, or short selling, is a strategy used by traders that’s based on the speculation a stock’s share price is about to go down. Basically, traders borrow shares of stock from a broker and sell them into the market at their current price. Once the share price goes down, traders buy them back, return the stock to the broker and pocket the difference. A perfectly legal strategy that can make a lot of money.

That is, unless the share price actually goes up instead of down before the trader buys it back. Which is what happened when a group of Redditors banded together to drive up shares of GameStop, the ubiquitous mall video game retailer. Hedge funds lost a lot of money, and when the big guys are bleeding money, they’re apt to cry “market manipulation” and call for regulatory intervention.

But the thing is, as far as we know currently, nothing illegal transpired. In order for the Securities and Exchange Commission — the guys in charge of regulating the market — to successfully allege market manipulation, they have to prove the Reddit traders knowingly spread false information. Simply expressing an opinion or letting other people know you’re going to buy stock is perfectly legal, said Nejat Seyhun, professor of finance at the University of Michigan.

According to this Harvard Law School paper, “To successfully allege price manipulation against a defendant under the [Securities Exchange Act of 1934], the plaintiff must prove that ‘(1) the defendant possessed an ability to influence market prices; (2) an artificial price existed; (3) the defendant caused the artificial price; and (4) the defendant specifically intended to cause the artificial price.’ Specific intent requires that the defendant has ‘acted (or failed to act) with the purpose or conscious object of causing or effecting a price or price trend in the market that did not reflect the legitimate forces of supply and demand.’”

So, even if these Redditors got together with the express purpose of bankrupting a hedge fund by buying a specific stock, Seyhun said, in his opinion, that’s legal.

“If they’re saying ‘we want to bankrupt the other side,’ that’s the same thing as ‘we wanna make a lot of money,’” he said.

And it’s really not all that different from what hedge funds themselves do. As Vox reporter Emily Stewart put it to Kai Ryssdal in an interview, “is this different than a big hedge fund guy going on CNBC and being like, ‘I think this is good or bad’ […] that’s allowed.”

And as Robert Reich, former Secretary of Labor, put it on Twitter: “If Redditors rallying GameStop is unacceptable market manipulation, what would you call it when greedy Wall Street bankers gambled away our entire economy in 2008 and faced no consequences?”

But, what could end up potentially being illegal is how certain trading platforms responded to the GameStop stock frenzy. Robinhood, for example, temporarily put a halt on buying more GameStop stock Thursday, only allowing its users to sell or hold the stock. Robinhood reversed course Friday.

The SEC released a statement Friday saying they will look into what has happened this week.

“The Commission will closely review actions taken by regulated entities that may disadvantage investors or otherwise unduly inhibit their ability to trade certain securities,” the statement read, in part. “We will act to protect retail investors when the facts demonstrate abusive or manipulative trading activity that is prohibited by the federal securities laws. Market participants should be careful to avoid such activity.”

And several Democratic lawmakers are calling for an investigation and more regulation.

It’s hard to say how this saga will end. Right now, the Redditor retail traders are successful. There has been a transfer of wealth from hedge funds to the Redditors, said Bjørn Eraker, the Bill Nygren Chair of Investments and professor of finance at the Wisconsin School of Business.

“They won the game, or at least round one or two of the game,” he said. “In the long run, these retail traders are playing with fire, because the prices of these stocks eventually will very likely go down. Then the question becomes, ‘who takes the loss?’ Very likely, collectively as a group, these retail traders are probably going to see big losses.”