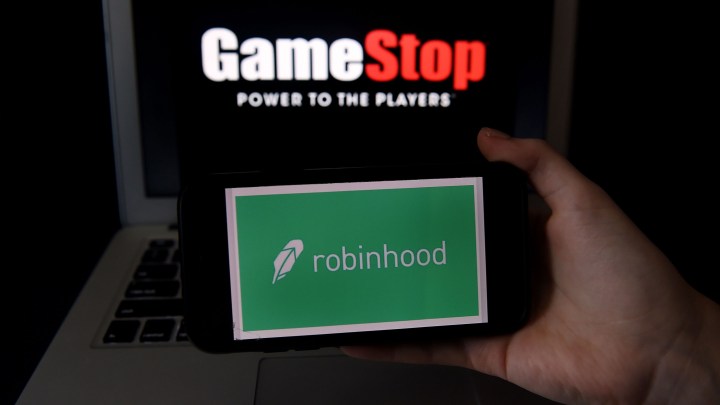 The gyrations continue with stocks like AMC Entertainment, Tootsie Roll, Nokia and GameStop. After shares of the video game retailer closed down 44% Thursday, they were up about 80% at market open Friday. Trading of the shares even halted for a few minutes on the surge due to volatility.

So what changed? Depending on which online platform they were using, retail investors could only sell or hold, but not buy, those stocks on Thursday. Robinhood halted trading those companies involved in the dramatic tug of war between bullish individual investors and skeptical professional hedge funds.

There were all kinds of conspiracy theories online that Robinhood was trying to appease a big hedge fund. The online trading platforms say the reason for these restrictions, which have infuriated some, is that clearing a trade for customers means brokerages have to put up a bunch of money in the short term.

Robinhood clears stock trades through a clearinghouse. The clearinghouse basically stands between buyers and sellers, and it manages the risk to the market if one side of a deal defaults and doesn’t pay up.

Robinhood traders were making so many risky bets on stocks like GameStop that the clearinghouse started demanding lots of collateral from brokerages like Robinhood to back up those risky bets in case they went bad. Robinhood reacted by temporarily banning purchases of volatile stock.

It also reportedly borrowed hundreds of millions of dollars, tapping into its lines of credit, and raised $1 billion overnight to shore up its finances.

On Friday, Robinhood is once again allowing purchases of those stocks, albeit limited ones. It will continue to monitor the situation and “make adjustments as needed.” Another online brokerage, Interactive Brokers, is relaxing restrictions, too.

The result of the restrictions, though, is that some people could freely trade and others couldn’t. Jill Fisch, a securities law professor, said there are legal implications to consider there.

“It’s a little bit problematic to think about banning customers from some brokerage firms from trading the stock while others are free to do so,” Fisch said. “It’s much more common if there’s a stock that’s mispriced or a stock that’s unduly volatile for the exchanges to take action so that all investors are treated equally.”

In fact, the Securities and Exchange Commission Friday morning put out a statement saying it will closely review actions that may disadvantage investors or inhibit their ability to trade.

Also, members of Congress are calling for hearings over these concerns.

Looking a little further into the politics of what’s been cast as a mostly financial story, there’s also a “take that, you greedy elites” aspect to some of this investing from individuals. And that’s despite all of the risk that comes with it.

In other words, it says something about our current cultural and political moment.

“It’s just fascinating,” said Christopher Low, chief economist at FHN Financial. “The economic anger underlying all of this, even to the point where they say, ‘look, we know it’s a bubble, we know we’ll probably lose out, and we don’t care. We’re just glad to have been part of the revolution.’ “

Low recently sat down for a dinner with two 20-somethings, both of whom were trying to get him to jump on the bandwagon of buying the stocks that have been in the sights of retail investors. The thing is, they were two 20-somethings on opposite sides of the political spectrum who were now uniting over “what they see as economic injustice by billionaires taking advantage,” Low said.

It’s a kind of populism expressed through a portfolio.

“I think it is important to understand seriously that there are people in government who are aware of this and have been warning about it for years,” Low said.

“As [Treasury Secretary] Janet Yellen said when sworn in as Fed chair all those years ago, if we don’t do something about economic inequality, it is going to become a tremendous problem.”

Listen to our full conversation with Low on the “Marketplace Morning Report” here: