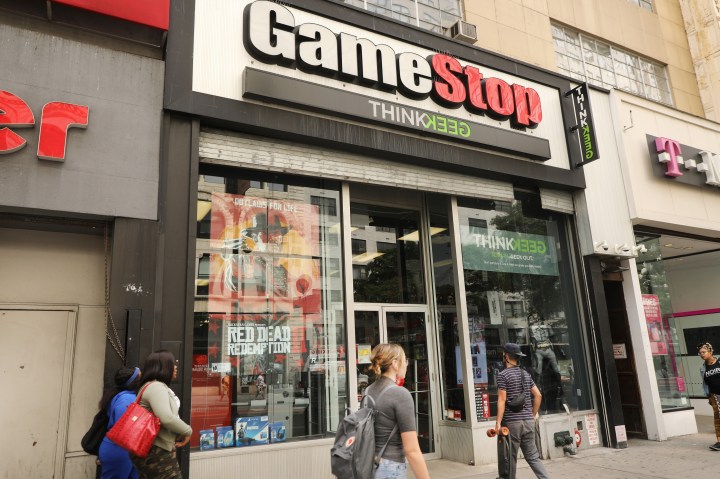 Read more about the GameStop saga below.

By now, you’ve probably seen the phrases “GameStop stock,” “r/wallstreetbets,” “short squeeze” and a swirl of other financial jargon. Here’s the short explanation of what’s going on: Wall Street hedge funds were hoping to make a profit off of GameStop stock falling, but Reddit posters thwarted their plans by pumping up the price.

GameStop’s stock has increased astronomically this month, closing at $347.51 on Wednesday — a far cry from record lows under $4 when the pandemic started. Tuesday, it was the most traded equity “on the planet” with $20 billion in volume, according to Bloomberg’s senior exchange-traded fund analyst, Eric Balchunas.

The brick-and-mortar retailer — which sells video games, consoles and accessories — had been hit hard by the COVID-19 crisis, with shares already declining for the past several years. The struggling company has been dealing with a changing video game market now that consumers can download games to their consoles and play them immediately (like renting or buying a movie on your TV, Marketplace’s Andy Uhler explained).

Here’s when things started to shift: In August, Ryan Cohen — founder of the online pet food company Chewy — disclosed that his venture capital firm, RC Ventures, had a 9% stake in GameStop. In November, his firm released a letter criticizing GameStop, which included claims that it “failed to adequately keep pace” with industry changes like the “transition from physical hardware to digital streaming” and the “explosion of mobile.”

The company’s stock price picked up toward the end of 2020 and gained steam after GameStop announced on Jan. 11 that Cohen was joining its board of directors — a sign that maybe the game company could turn things around. It jumped from $19.01 a share at closing time that Monday to $31.40 two days later.

In short selling, you borrow a certain number of shares from brokers, then sell them into the stock market at their current value. You have to pay interest based on how much demand there is, according to Hilary Kramer, chief investment officer for Kramer Capital Research.

Once the share price goes down, you can buy them at the lower price and return them to the broker you borrowed them from. You’ve now gained the difference between the amount you sold them for and the lower price you paid when you bought them. Everyone is, theoretically, happy.

It’s kind of like the adage “Buy low, sell high” in reverse.

Now here’s the problem: What if the stock never falls, and only rises? Short sellers will then scramble to buy back the stock before it goes even higher, in what’s known as a short squeeze. That mass buying will cause the price to climb even higher.

“It’s a dangerous game because you are borrowing stock you don’t really own,” Kramer said.

That’s what happened in GameStop’s case. After seeing that it was a heavily shorted stock, traders on the subreddit WallStreetBets, which has more than 3.5 million members — who are known as “degenerates” — have egged each other on. Many bought GameStop call options, which allow investors to buy shares for a certain price by a specific date.

Kramer said that some GameStop short sellers are buying the stock to close their positions and return the shares, while others are buying stock because they see value in it and want to get in the game.

As for what this means for GameStop as a company, it does have the potential to raise capital, said Ben Carlson, director of institutional asset management at Ritholtz Wealth Management. (“Which would be kind of crazy,” he added.) But other than that, he said, this trading chaos doesn’t change much for the company because the shares have already been issued publicly.

We’re seeing short squeezes with other struggling companies too, like the movie chain AMC. Its shares had been under $3 throughout this month, but they closed Wednesday at $18.86.

“It’s not happening at a company like Apple, Netflix or Facebook,” with their high-value, stable stocks,” Carlson said. “It would be basically impossible for them to push it around. But with these relatively smaller stocks, it wouldn’t shock me to see this type of behavior continue.”

Some people are now calling for intervention from regulators, including the Securities and Exchange Commission. During a White House news conference, President Joe Biden’s press secretary, Jen Psaki, said that Treasury Secretary Janet Yellen and others “are monitoring the situation” and that the stock market is not the only measure of a healthy economy.

This behavior is actually somewhat similar to the activities that paved the way for the SEC’s formation. Jim Welsh, senior portfolio manager at Smart Portfolios, compares it to the “stock pools” that developed during the 1920s.

“Operators of stock pools took in public money and then used it to manipulate individual stocks,” he wrote in his newsletter Weekly Technical Review. “After the 1929 crash and the investigations that followed, the manipulation by stock pools and other abuses led to the formation of the [SEC].”

However, Financial Advisor magazine wrote that the SEC would face an uphill battle because successful enforcement cases usually involve investors spreading false information to trick others into buying or selling a stock.

Things are unclear right now. In an interview with Marketplace’s Kai Ryssdal, Vox reporter Emily Stewart raised the question of whether this is all that different from a hedge fund guy going on the CNBC business news channel and stating his opinion.

“You can’t blame some of these retail traders for playing a game that plenty of really rich people have been playing for a long time,” Stewart said. (Click the media player above to hear their full conversation.)

Carlson, of Ritholtz Wealth Management, said the scenario of retail traders trying to take down these huge, well-known hedge funds is not something we would have seen 20 years ago.

“Now people have the tools and the communication abilities to do something like that,” Carlson said. “I think it’s fascinating and I don’t know where it goes from here, but the fact that it happened is pretty mind-blowing.”