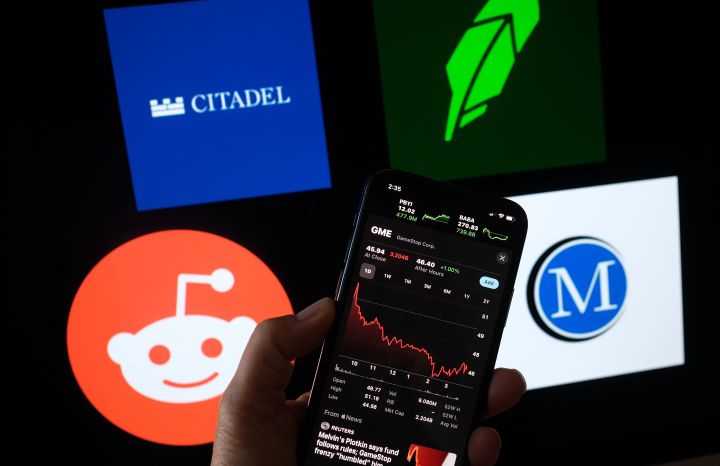 Last year, stock ticker GME caught the attention of Wall Street, the media and even Congress, thanks to the collective action of retail investors on a Reddit forum. At the time, GameStop shares’ skyrocketing price was seen as a revolt against Wall Street’s Establishment, with some commentators calling it a “seminal moment” for retail investing.

In a new book called “The Revolution That Wasn’t: GameStop, Reddit, and the Fleecing of Small Investors,” Wall Street Journal editor Spencer Jakab argues that though some hedge funds lost money and a few retail investors got rich, the real winners of the GameStop stock trading frenzy were professional investors and the American financial services industry.

“Most of Wall Street is made up of middlemen,” Jakab told “Marketplace” host Kai Ryssdal. “They love it when markets are volatile, and they really, really love it when people get excited and think they can beat ‘the house.’”

The following is an excerpt from “The Revolution That Wasn’t.”

I’ll never forget the day I found out that my sons were degenerates.

With my newsroom shut by COVID-19, I was working from home the morning of January 25, 2021, when I stopped editing a column for the next day’s Wall Street Journal midsentence to see what they had been up to on the internet. After less than ten minutes of scrolling, I began to draft an email. It wasn’t to their mom or their principal or even a child psychologist. It was to the publisher of the book you’re holding in your hands.

My oldest boy, a college senior, and my youngest, a high school freshman, were members of a “subreddit” called r/wallstreetbets whose members call one another degenerates, apes, and some even less flattering names. I had been aware of social networking site Reddit’s freewheeling stock market forum for about a year at that point — an irreverent alternative to its older, more buttoned-down r/investing board. In the months before the pandemic, with the market booming, every week or so some random stock would jump on heavy volume because its members had started to buy it en masse. As far as I was concerned, it was an amped-up version of the infamous Yahoo stock message boards of the late 1990s. I would soon learn that I had woefully underestimated modern social media and the power of the latest smartphone-based, commission-free trading apps.

When the economy ground to a halt and stocks plunged as the world grasped the severity of the pandemic, older, grayer investors once again failed to follow their own advice about buying when others were panicking. Not the degenerates, though— maybe because they didn’t know any better. The amateurs plunged in, and soon they were running circles around investing legends like Warren Buffett. But they were doing dumb things too like buying the shares of bankrupt companies or snapping up stocks with names that sounded like ones mentioned on Twitter by Elon Musk but that actually were worthless shells. Traders and fund managers thought it was hilarious. From what I saw and heard that morning, though, Wall Street wouldn’t be laughing anymore.

My oldest son had prompted my deep dive into the subreddit by asking whether I was writing something about GameStop. The reason was that a friend of his, a bright boy I had known since they were both in kindergarten, had bought shares in the video game retailer after reading about it on WallStreetBets and had nearly doubled his money in a couple of days. When I said he should count himself lucky and sell and he said he absolutely wouldn’t, I was intrigued and began to read the forum.

With three sons, I was all too familiar with GameStop. I had driven them there countless times as they bought discs and then later traded them in for different ones. From editing columns about the chain over the years and from my sons’ recent preference for bypassing the store and buying digital games online, I knew it was a dying business — sort of like Blockbuster Video after Netflix really started to take off. This was so obvious that it seemed like every hedge fund manager on Wall Street had piled into a bet that its share price was eventually headed to zero.

But the pros suddenly found themselves facing a group that wasn’t interested in cash flows or when the next Xbox was coming out. If a stock went up for a week, or a day, or even a few hours and they sold it in time, the degenerates were happy. Over the past year or so, they had noticed that some stocks rose simply because they and a lot of strangers they had met on Reddit bought them. There was power in numbers.

Now they were playing a new and dangerous game — ruining the lives of hedge fund bosses. There were more than two million members of WallStreetBets by that day, and the group’s membership would quadruple within a couple of weeks as they shocked the financial establishment.

Some users had grasped that investment funds were exposed to unlimited losses because they had engaged in a technique called “short selling” that allowed them to profit if stock prices fell — the opposite of what most investors do. The funds’ bet against GameStop was so popular that it had left them with a very narrow escape hatch if the price started to rise sharply for some reason. With brokers like Robinhood allowing inexperienced traders to buy stocks using borrowed money and to employ derivatives that acted like a force multiplier, the amateurs had the means to do some serious damage.

They also had the motive. There was a lot of resentment in America at wealth inequality and what seemed like two sets of rules — some for the rich and connected and others for everybody else. Their formative experiences had included struggling to repay student loans and seeing their parents struggle during the financial crisis. What had started out as a way to have fun and make some money gained a special frisson: exacting revenge on the architects of a rigged system.

Intuitive, colorful apps made it surprisingly easy for a generation that had grown up glued to their phones. Bored and stuck at home during the pandemic, they found speculating on the stock market and comparing notes with strangers online even more exciting than betting on sports and, in a bull market, a whole lot more lucrative too. With nearly every stock going up, the challenge wasn’t to pick a winner but to find a trade that would make it rain money. Meme-loving influencers who were rich, but the good kind of rich, were all too happy to make suggestions.

The new class of investors didn’t trust traditional Wall Street advice, yet many were more than willing to take their cues from those influencers, and from fellow Redditors. Now some members of WallStreetBets who seemed to know a lot about arcane financial subjects like short selling and derivatives were talking about an investing opportunity that was a twofer — a way to make a bundle and to send some people who were the bad kind of rich to the poorhouse. The only thing was that you needed “diamond hands” — to hold on no matter how high the stock went. That was why my son’s friend wouldn’t sell.

Secretly setting up a stock market corner in which you squeeze a short seller dry by snapping up all the available shares was the sort of thing that happened all the time in 1921, but not in 2021. It has long been illegal. But what if, instead of a few rich people doing it behind closed doors, a few million strangers with small accounts did it in full public view? Even if regulators cried foul, what on earth were they going to do about it?

Not that they were paying attention as the wave was gathering strength. Neither were big fund managers. They were too busy staring at their Bloomberg terminals to waste time scrolling through memes on Reddit. If they had, they would have seen newly minted speculators with chips on their shoulders writing entries like “the biggest short squeeze of your life” and “Bankrupting Institutional Investors for Dummies.” Some of these managers would even have seen their own names as the degenerates perused public securities filings. Instead of taking their lumps when GameStop shares kept rising, at first the pros saw a lot of weak hands and pushed even more chips into the pot. As Hemingway once described going broke, the force that would threaten to bankrupt some of the biggest players on Wall Street hit “gradually and then suddenly.”

And then it got weirder. As cascading losses and surging volume threatened to overwhelm not just those funds but the very plumbing of the financial system, the game was put on hold. Suddenly brokers like Robinhood suspended the ability to buy more of the stocks that were on everybody’s lips. No such restrictions were placed on the fat cats, though. The game was rigged!

But it always has been.

Adapted from “The Revolution That Wasn’t: GameStop, Reddit, and the Fleecing of Small Investors” by Spencer Jakab, published by Portfolio, an imprint of the Penguin Publishing Group, a division of Penguin Random House, LLC. Copyright © 2022 by Spencer Jakab.