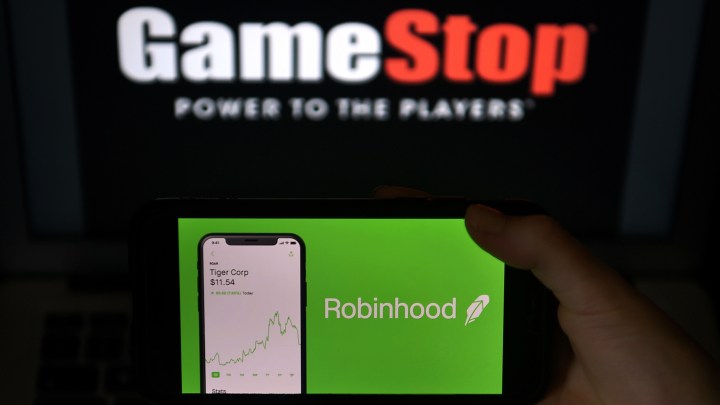 Payment for order flow, a practice used by Robinhood, was also scrutinized during the hearing. Olivier Douliery/AFP via Getty Images
GameStop

Payment for order flow, a practice used by Robinhood, was also scrutinized during the hearing. Olivier Douliery/AFP via Getty Images

The hearing — titled “Who Wins on Wall Street? GameStop, Robinhood, and the State of Retail Investing” — featured five witnesses who provided expert opinion on how government should respond following the trading frenzy that cost hedge funds billions and some retail investors hundreds of thousands. And lawmakers worry that volatility could shake the confidence of Americans who have retirement savings invested in the stock market.

Chairman Sherrod Brown, D-Ohio, opened the hearing by detailing how the stock market rebounded at a record pace during the COVID-19 pandemic, calling it “detached from the economy and the reality of most Americans’ lives.” The GameStop episode showed that retail investors could create a sensation, but it also revealed serious risks, he said.

“There are real people who got caught up in the frenzy who suffered real consequences,” Brown said. “If the people who are busy working, watching their kids, or living their lives can’t make sense of the stock market’s booms and busts, they’ll continue to lose faith in the market. And hedge funds and insiders will continue to reap the vast majority of the profit.”

It’s now clear that while some retail investors benefited from the chaos, so did the Wall Street elite.

Here are the main takeaways from the hearing.

A tax to discourage risky trading

A financial transaction tax was mentioned by several senators, including Chris Van Hollen, a Maryland Democrat who said he would reintroduce legislation he had penned supporting the tax in 2019. The idea is that adding 0.1% to the cost of every transaction would discourage high-frequency trading that leads to market instability, as we saw with GameStop, but would not impose substantial losses on the average American shareholder.

Teresa Ghilarducci, professor of economics at the New School for Social Research, said during the hearing that the financial transaction tax is “an idea whose time has come.”

“If it’s too high, it will have bad effects on long-term savings. If it’s too low, it won’t have any effect,” she said. “If you get it just right — and actually 0.1% is about right — it shifts from high-frequency trading [and] changes behavior towards more long-term holdings — exactly where all of us want people to be with their stocks.”

The tax “would generate billions of dollars that we could invest in greater opportunity for other Americans; it would reduce wealth and economic inequality and reduce volatility in the market,” Van Hollen said.

Payment for order flow, in which brokers sell clients’ orders to be filled by another firm, was also scrutinized during the hearing. The decades-old practice has drawn more attention since the GameStop saga because the trading app Robinhood sells customers’ orders to firms like Citadel Securities.

Witnesses warned about the practice, including Gina-Gail Fletcher, a professor of law at Duke University.

“Under the payment-for-order-flow model, brokers are incentivized to put their own profit-seeking interests above their clients’ in deciding where to route their orders,” she said. “This greatly undermines the broker-investor relationship, likely leaving retail investors in a worse position.”

And Rachel Robasciotti, founder and CEO of Adasina Social Capital, said outright she believes the model should be banned.

But Michael Piwowar, current executive director of the Milken Institute Center for Financial Markets and a former commissioner at the Securities and Exchange Commission, said the SEC already has regulation to help control that conflict of interest.

“If the SEC were to ban payment for order flow, we would likely go back to commission trading — it would cost to trade,” he said. “[That] doesn’t eliminate a conflict of interest. It just changes it.”

Andrew Vollmer, senior affiliated scholar at the Mercatus Center at George Mason University, agreed, adding that “every participant that provides services in the market deserves some reasonable, fair compensation. Payment for order flow is a method of compensation. If you remove it, you need to find another mechanism.”

The “gamification” of trading

Sen. Catherine Cortez Masto, D-Nev., posed the idea of regulating the design of trading apps, noting her concern that apps like Robinhood target young people who are “more engaged in gaming apps than we’ve ever seen before.”

Fletcher at Duke University said it should be studied further, but behavioral economics was certainly at play. “When we have things like confetti raining from the sky for having done a trade, this raises concerns about the encouragement that we’re giving traders for just doing trades. [That] may be problematic as we think about trying to have encouraged appropriate behavior within the capital markets.”

Piwowar at the Milken Institute, though, said there could be some value in using a game model to teach young people about trading.

Cortez Masto also discussed the idea of restricting stock trading to people 21 and older. Throughout the hearing, the idea that the stock market is essentially a casino was consistently raised. “Our casinos do not allow anybody that’s under the age of 21 to gamble,” the senator from Nevada said. “And there’s a reason: We want to protect our youth.”

While Robasciotti of Adasina Social Capital disagreed with a 21-plus requirement for trading, she did advise properly educating young people about the capital markets.

“It’s incumbent upon us as a society [that] in that transfer of responsibility for our long-term financial security, we need to also transfer the education,” she said. “Right now, it’s just happening within families, mostly from father to son in wealthy families. I believe that’s a big underpinning reason for why there’s such concentration of wealth where it is in the country.”