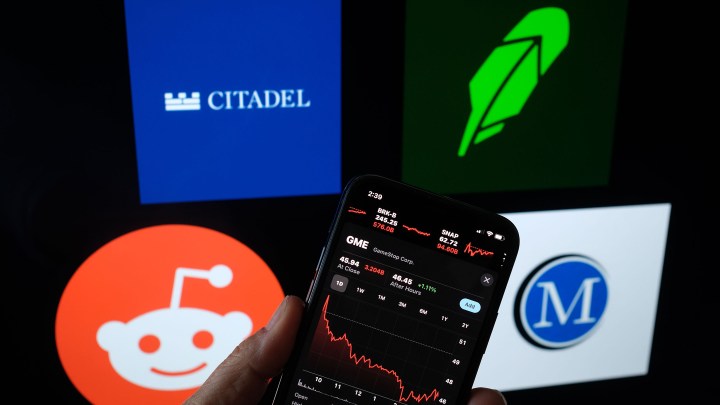 COPY
A person checks the GameStop stock with the Reddit, Citadel, Robinhood and Melvin Capital logos in the background in this photo illustration. Chris Delmas/AFP via Getty Images

A person checks the GameStop stock with the Reddit, Citadel, Robinhood and Melvin Capital logos in the background in this photo illustration. Chris Delmas/AFP via Getty Images
Listen Now

When documentary filmmaker Jonah Tulis first caught wind of the GameStop/Reddit ordeal, he knew it was movie material.

“Normally I spend a year or two with subjects, learning about them and gaining the trust where I can tell their story. And in a situation like this, it was a few weeks before I built these relationships.”

The apparently made-for-TV drama between hedge funds that had bet against GameStop and Redditors (and other hedge funds) that helped drive up the price consumed Wall Street for days and led to congressional hearings.

Tulis said the story has a classic appeal: “Some were contrarian investment advisers who went up against these big guys. I think there’s a David and Goliath story here, but it really is about the people.”

Tulis is actively working on a GameStop documentary. Others had similar thoughts. HBO has a feature film in the works; MGM bought rights to a book about the GameStop saga that won’t even be out until the fall. But he’s confident.

“There are other projects going on; people are announcing right and left,” Tulis said. “But then I talk to the subjects that I think are important in the story, and they’re like, ‘Well, no one’s reached out to us.’”

Hollywood loves stories about Wall Street, its excesses and its Robin Hoods. The Great Recession gave us “The Big Short,” “Margin Call” and “Inside Job.”

Emily Carman, film history professor at Chapman University in California, said that fascination dates back to the Great Depression.

“Especially in the ’30s, the bankers become your antagonist,” Carman said.

“Yeah, I know,” Carman joked. “It sounds like it could be very applicable right now, just putting it with the GameStop/Reddit situation.”

Still, nine movies or TV shows about the same incident seems like a lot. Putting time and money into a topic that so many other people are already working on is risky. But New York University professor and former HBO Enterprises President Charles Schrager said studios haven’t spent the real money yet.

Movie budgets can be tens of millions of dollars. Buying the rights to a book could cost as little as $25,000, Schreger said. Top screenwriters could get paid $500,000.

“Buying the rights to, say, a magazine article, buying the rights to a book proposal, commissioning someone to write a script, that’s research and development,” he said. “Might be a lot of money to you and I. It’s not that much money to a studio.”

Schreger said of all the GameStop projects, it’s likely many will never get made. But places like HBO need to at least try, because with more platforms than ever before, “there’s just a dearth of stories and an over abundance of places that want to buy stories,” he said.

Among those projects that do get made, the clock is ticking.

But it’s not just timing.

“You have to be really focused on quality and distribution,” said Dan Cogan, an Academy Award-winning producer who is now producing a documentary series about GameStop for Netflix. “To be first and not to be good is really not worth that much.”

One thing is for sure:  You’re going to be hearing about GameStop for a long time to come.