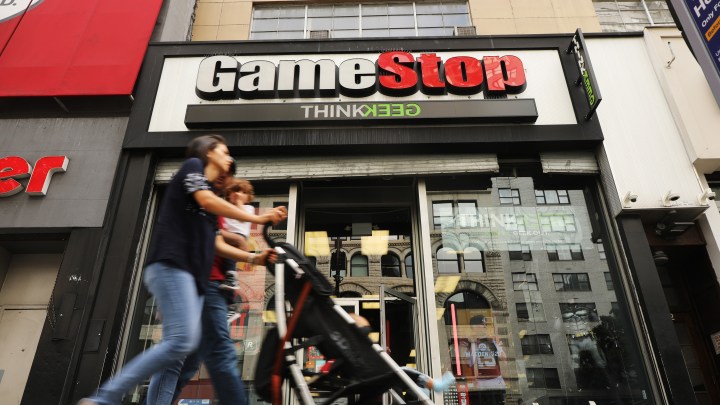 COPY
Shares of GameStop, the original meme stock, have dropped again, though they’re still higher than they were in early 2021.  Spencer Platt/Getty Images
GameStop

Shares of GameStop, the original meme stock, have dropped again, though they’re still higher than they were in early 2021.  Spencer Platt/Getty Images
Listen Now

Shares in GameStop, the video game store, fell more than 30% Monday after its massive, Reddit-fueled rise in January.

But it’s still up more than a 1,000% from where it was a month ago. So what does that mean for the company?

One way GameStop could try to capitalize on this sudden, huge spike in its stock prices would be to issue new stock and sell it while the price is so high, said Chester Spatt, a finance professor at Carnegie Mellon University.

“Those prices are indicative of what investors would be willing to pay for new stock issued by the company,” he said.

That’s what Tesla did when its stock went way up, said Ciamac Moallemi at Columbia Business School.

“Tesla has also had a tremendous run up in its stock over the past year, and they’ve taken advantage of that by raising billions of dollars in funds by selling stock,” Moallemi said.

There is risk, he said, in issuing new stock.

“That could have the effect of driving the price down, and to the extent that there may be a bubble, perhaps ending the bubble and, you know, game over, if you will,” Moallemi said.

Or it can pay off and, Moallemi said, help a company get back on a firm footing and invest in different aspects of the business.