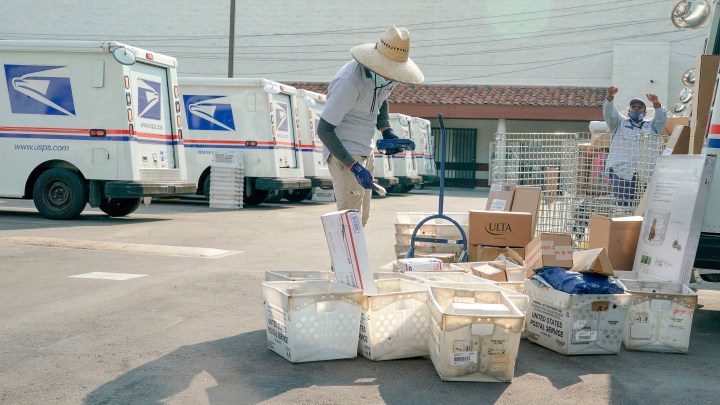 Laura Galindo runs a small business on Etsy called Lalis Art Shop. She sells pet portraits — you send her a picture of your pet, wearing a little red sweater or a bow tie, and she paints it.

She uses the U.S. Postal Service for shipping. And right now, more than 10 of her packages are delayed and four or five have no tracking information.

“I don’t know if they’re going to make it or if they’re missing,” she said. “It’s kind of like they’re lost right now,” she said.

Customers aren’t happy. One of them just gave her a one-star review, with no comment, and then privately said it’s because the item hadn’t arrived yet.

“So I was like, well, I can’t really do anything about that,” Galindo said.

We’re expecting record online sales this holiday season — Adobe predicts a 33% increase compared to 2019. And with so many more people shopping online, shippers are having a hard time keeping up. It’s a huge problem for small business owners.

Melissa Esposito, who owns a handmade and vintage goods store in Washington, D.C., called Analog, recently shipped a customer a $40 item through the post office.

“I sent it on Dec. 1,” Esposito said. “And it didn’t even get entered in their system until December 10.”

She had no idea where it was. Did it get smashed or stolen?

“I didn’t even have another one to send her if that one didn’t get there,” she said. “And I didn’t want to have to refund her that much money for something that wasn’t my fault.”

The U.S. Postal Service said in a statement that it is facing delays due to historic holiday volume and a shortage of workers.

Katie Stack, another online seller, says one of the hardest parts of all this is that many people are making a conscious effort to support small businesses like hers this year.

“They’re willing to pay 20% more, or whatever it is, above what you could get at a big-box store,” she said.

Her business Stitch & Rivet sells tote bags and leather goods online and ships through the postal service and UPS.

“It’s frustrating, because it sort of feels like we’ve been hung out to dry a little bit,” she said.

UPS said in a statement that as of Dec. 12, its on-time delivery rate is more than 96%, according to calculations by the shipping consulting firm ShipMatrix.

The frustration that customers feel can linger even after a package arrives.

The woman who gave Laura Galindo a one-star review … eventually got her dog portrait.

“She contacted me again and she said she really liked it,” Galindo said.

But the customer hasn’t changed her review.