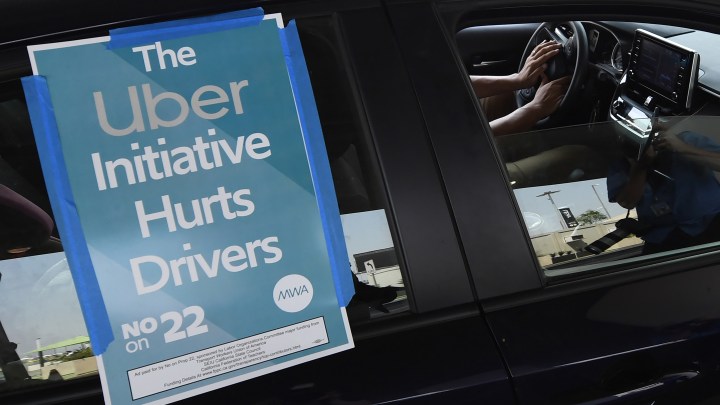 COPY
A ride share driver participates in a protest against Proposition 22 in August in Los Angeles, California. Robyn Beck/AFP via Getty Images
Elections 2020

A ride share driver participates in a protest against Proposition 22 in August in Los Angeles, California. Robyn Beck/AFP via Getty Images
Listen Now

At least one race that delivered a clear and decisive victory on Tuesday: the battle over the future of the gig economy in California. Proposition 22 exempts gig drivers from state law AB5, which would have forced the gig platforms to classify them as employees instead of independent contractors, with all the added benefits that status brings.

Uber, Lyft, DoorDash and other app platforms spent more than $200 million promoting the measure, which passed by a comfortable margin. Its success means drivers will remain independent contractors with some new limited benefits, like a pay floor and contributions to health care and accident insurance, and could have implications for the gig economy beyond the state’s borders.

If the measure hadn’t passed, California would have forced a dramatic reshaping of the gig economy, said Harry Campbell, founder of the Rideshare Guy blog.

“We don’t know exactly what would happen if drivers became employees, but I think it’s a safe bet that there would be less drivers, there would be more rigid scheduling,” he said.

That won’t happen now. The “gig” will stay in the gig economy in California. The mostly part-time drivers who prize the flexibility of working here and there for whichever app they choose will continue to be able to do so, with some added benefits, and the drivers who seek the security of a full-time job will likely continue to be disappointed, he said.

That status quo is troubling to Rebecca Givan, a professor of labor studies at Rutgers University.

“This ballot initiative will embolden employers in all kinds of sectors to say that maybe we can do the same thing with waitstaff and restaurants or supermarket cashiers,” she said.

She worries employers with cash to throw around have learned a new way to circumvent labor laws they don’t want to comply with.

Seth Oranburg, a law professor at Duquesne University, says the measure could clear the way for new businesses. “It’s going to encourage new startups to pursue gig worker models and technologies, because it just got less risky to do it,” he said.

By creating a defacto third class of worker, one designated as an independent contractor but with some of the benefits of traditional employment, Proposition 22 could also pressure other states and the federal government to change the labor laws that have governed employment for more than half a century, said Oranburg.

“This is a step on the road to a third classification at a federal level,” he said. “What we’ve seen in California is that the people said gig workers don’t fit into either the employee or the independent contractor bucket.”

“We now have a framework to fund benefits, not just for full-time employees, but for people who have other work arrangements — for freelancers, for independent workers,” he said, noting that this will become increasingly important as the nature of work, access to the safety net and jobs continue to be challenged by the pandemic.

Elections 2020Workplace Culture
Tags in this Story
Share this Story