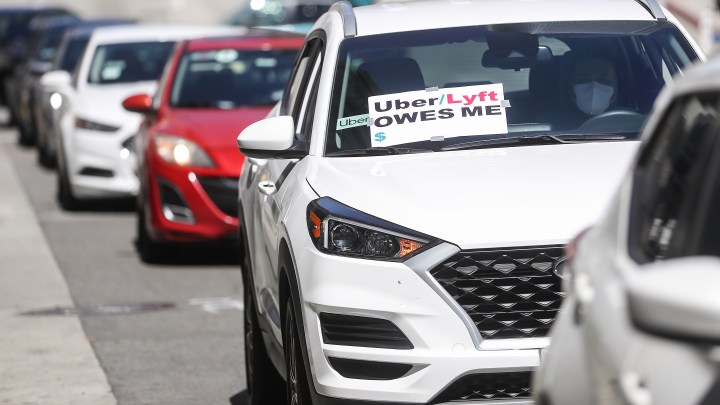 COPY
The conflict has come after a judge supported a state law that classifies drivers as employees, not contractors. Mario Tama/Getty Images

The conflict has come after a judge supported a state law that classifies drivers as employees, not contractors. Mario Tama/Getty Images
Listen Now

A battle over the contractor economy may erupt into full view in California on Thursday. Uber and Lyft could shut down their services in the state at midnight, after a judge supported a state law that classifies drivers as employees, not contractors.

The ruling from a San Francisco judge last week ordered Uber and Lyft to comply with a new California law, tightening rules over who is an independent contractor and who is an employee. The law’s aim is to extend traditional benefits, such as paid sick leave and unemployment insurance, to more workers.

The judge stayed his ruling for 10 days — that stay expires at midnight, meaning Uber and Lyft would have to comply. The companies have asked a state appeals court to intervene. If it doesn’t today, they say they’ll shut down in the state for months or longer to retool their businesses.

One option is to license their brands to franchisees that operate car fleets. Uber employs a similar system in parts of Europe.

The two companies are also pushing an initiative on California’s November ballot that would grant them an exemption from the state’s gig-worker law.