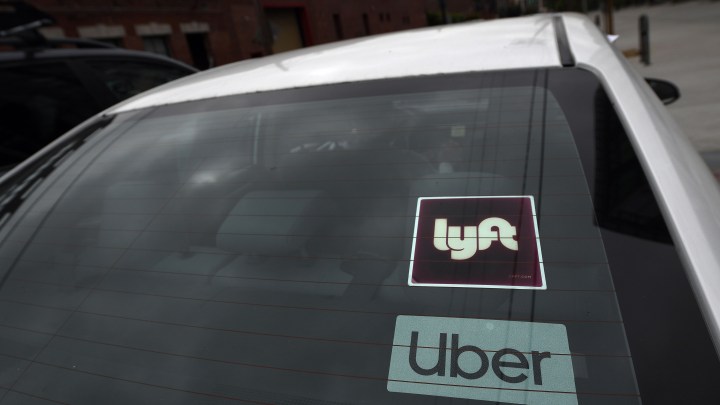 COPY
Gig companies have expressed they want to give their contract employees some sorts of benefits but not classify them as employees. Union leaders have said they are willing to reach a compromise. Robyn Beck/AFP via Getty Images

Gig companies have expressed they want to give their contract employees some sorts of benefits but not classify them as employees. Union leaders have said they are willing to reach a compromise. Robyn Beck/AFP via Getty Images
Listen Now

A court in California has told Uber and Lyft that drivers are employees not independent contractors, temporarily at least.

Marketplace’s Kristin Schwab has more. The following is an edited transcript of her conversation with “Marketplace Morning Report” host David Brancaccio.

David Brancaccio: California has a law to this effect that’s under challenge?

Kristin Schwab: Yes, a new law, called Assembly Bill 5, went into effect at the start of the year. And it did reclassify gig workers as employees. But Uber and Lyft have continued to put their drivers down as independent contractors. Uber has tried to skirt the law by letting workers set their own rates so the company can say drivers are truly contractors who work for themselves. So this preliminary injunction is the state basically calling these ride-hailing companies out and saying, hey, what you’re doing is not legal and you need to comply.

Brancaccio: So what happens now?

Schwab: Lyft and Uber have 10 days to appeal. If the judge sides with the state, the companies could owe penalties and compensation to drivers. And this isn’t the only thing the gig economy is keeping an eye on right now. In November, California voters will likely see a ballot measure from these companies as an exemption that, if passed, would classify app-based drivers as contractors. Obviously ride-hailing companies want to win this or it will cost a lot more to operate.

Brancaccio: What does this mean for the gig economy?

Schwab: California is Uber and Lyft’s biggest market. And though this preliminary injunction targets them, it sends a message to other gig-based companies, like food delivery apps. Because it would be a big step in forcing these companies to pay minimum wage and overtime, plus other things like vehicle mileage. And experts say this could push more states to do the same. For riders, it could mean higher costs.