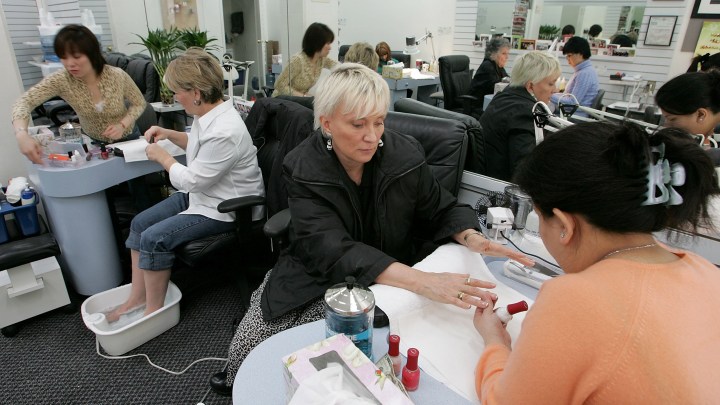 COPY
Under the new California bill, nail salons would have to classify their technicians as employees. Above, a nail salon in San Francisco. Justin Sullivan/Getty Images

Under the new California bill, nail salons would have to classify their technicians as employees. Above, a nail salon in San Francisco. Justin Sullivan/Getty Images
Listen Now

The bill’s advocates, including labor unions, say it will crack down on businesses that misclassify workers as independent contractors, when they’re actually employees, denying them health benefits, overtime and other legal benefits. Uber and Lyft want to retain their drivers as independent contractors, while offering a separate agreement to extend some benefits, such as a wage floor. But what do drivers and other workers in the gig economy think about all of this? Marketplace reached out to a few of them on the job.

Uber has almost 4 million drivers, and for the last three years, Anesia Turner has been one of them. Turner drives full time at the moment, but said she plans to attend aesthetician school this fall. She likes the flexibility of the ride-hailing apps, scheduling when she drives around school or caring for her two sons.

“It’s convenience,” Turner said. “You can set your own hours if you have to take your kids to school or whatever. You can do that and still make money.”

On Wednesday, she began driving at 10 a.m. and planned to work for eight to 10 hours.

Some people, like Turner, make their full-time living from these app-based companies, but for others, they’re a side hustle. Baltazar Montoya installs fire sprinklers for a union, but sometimes he will have months where he’s not needed. He supplements his income by delivering food with the app Postmates.

On Tuesday, Montoya started making deliveries at 10 a.m., and he estimates that by 3 p.m., he’ll have dropped off food to at least 30 different locations.

He likes being able to choose the deliveries he wants to make. But Montoya sees a benefit should the California law pass and Postmates reclassifies him as an employee. He notes a common complaint about gig economy companies — it’s not always clear how much of a cut they are taking from each job.

“If we became employees, we could probably talk about a base pay, a flat pay per delivery,” Montoya said. “It might be easier than having just one of us calling and asking.”

Labor unions have been some of the biggest backers of the Calfornia measure because employees can organize. But as independent contractors, gig economy workers lack the ability to collectively bargain with their companies.

Workers for new gig economy apps aren’t the only ones that AB 5 would affect. While many workers, such as real estate agents, doctors and hair stylists are exempt from changes to their employment status in the bill, nail salons would have to classify their technicians as employees.

Like many such workers, Susan Le at Nailsholic in downtown Los Angeles is an independent contractor. She, too, likes the flexibility of her job, even though she typically works regular hours.

She also has frequently traveled to other states to do the same work there, and she worries that a change in her employment status could limit her options. But, Le said, she and the other technicians have been discussing AB 5 and realize it represents an opportunity for more security.

The emergence of Uber and Lyft as dominant transportation options hurt not only the taxi industry, but also independent drivers like Oscar Arvizu.

On Wednesday, he sat in his shiny black Suburban, parked in the taxi line outside the L.A. Grand Hotel, waiting for a call or a guest checking out of the hotel. Arvizu said he used to own multiple cars and made a good living from driving independently before ride-hailing companies.

“When they were not here, our business was totally different. I had a lot of clients,” Arvizu said.

Now, Arvizu still drives independently, but other times he’ll turn on the apps for more work, even though he said he makes little money from them.

“They give us nothing, man,” Arvizu said. “Driving this car, all I get is gas money.”

Still, Arvizu expressed the same concerns about the impending law as Turner, Le and Montoya.