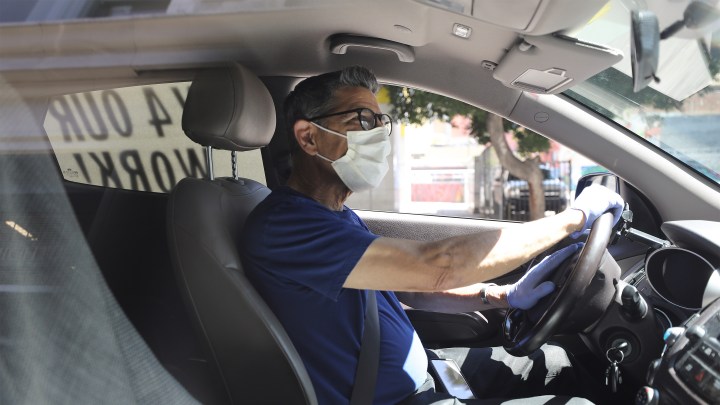 On Monday, several Uber and Lyft drivers, along with the New York Taxi Workers Alliance, sued New York officials, saying the state failed to pay them unemployment benefits in a timely manner.

Central to the issue of delayed claims, in New York and some other states, is confusion about which benefits gig workers are eligible for and how much they qualify for based on their incomes. The questions go back to a long-running debate over whether these workers should be classified as employees or independent contractors.

Concern about COVID-19 led Doh Seydou Ouattara, one of the plaintiffs, to stop driving for Uber and Lyft in mid-March.  He’s got three kids, including a newborn. At the beginning of April he applied for unemployment, but almost two months later he hasn’t received any payment.

“So instead of paying for rent, paying my car insurance, I stopped paying for bills and just focus on saving that money for groceries,” he said.

The issue of delayed unemployment for gig workers isn’t limited to New York. Nicole Moore was a part-time Lyft driver in Los Angeles who is now working with Rideshare Drivers United to help drivers navigate the California unemployment system.

“Rideshare drivers are waiting two and sometimes three months, and they still aren’t getting the right answers,” she said.

The confusion stems from the fact that there are now two types of unemployment benefits: the state program for W-2 employees and Pandemic Unemployment Assistance, a new temporary federal program for people — like independent contractors — who don’t usually qualify for the regular kind.

“The problem is that there are a lot of workers whose status as W-2 employees or independent contractors is contested,” said Brian Chen, an attorney with the National Employment Law Project.

He points to a 2018 court case in New York and a 2019 law in California, AB 5, which would force gig platforms like Uber and Lyft to classify their drivers as regular employees. So Ouattara in New York, and many drivers in California, applied for regular unemployment.

“But in a lot of these cases, their employer insists that they’re a contractor and eligible only for this temporary Pandemic Unemployment Assistance,” Chen said.

Uber, Lyft and several other gig companies are still challenging court decisions and laws that classify drivers as full employees, so they haven’t paid into the system.

As the legal challenges work through the courts, California and New York unemployment departments have directed gig workers to apply for Pandemic Unemployment Assistance or request a review of their application, which takes longer, if they believe they’ve been misclassified as independent contractors.

But full-time drivers usually qualify for smaller benefits on pandemic assistance than on regular unemployment because of the different ways the programs determine income eligibility.