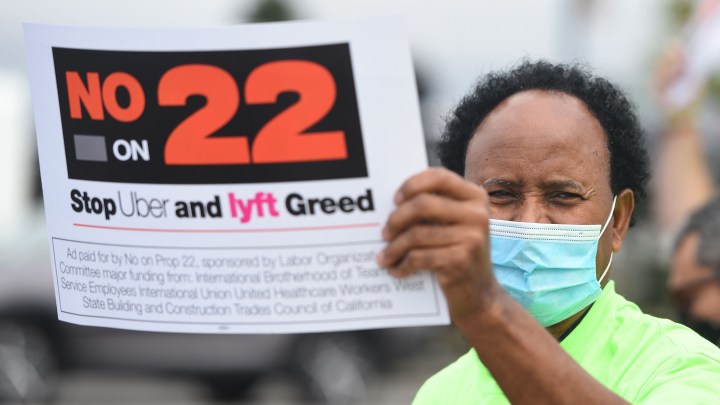 COPY
A ride-share driver holds up a sign urging Californians to vote "no" on Prop 22 in Oakland, California, on Oct. 9, 2020. Josh Edelson/AFP via Getty Images
Elections 2020

A ride-share driver holds up a sign urging Californians to vote "no" on Prop 22 in Oakland, California, on Oct. 9, 2020. Josh Edelson/AFP via Getty Images
Listen Now

Gig companies like Uber and Instacart are on track to spend a record amount of money on a ballot initiative in California that would allow them to keep classifying workers as contractors, which means the companies don’t have to pay for benefits like unemployment insurance or workers compensation.

Supporters of California’s Proposition 22 have raised over $199 million so far, with big donations from Instacart, DoorDash, Postmates, Lyft and Uber. That’s compared to about $19.5 million from the opposition, mostly organized labor. Much of the money from the gig economy companies is going into an advertising campaign built around social justice.

One ad features a woman who says she’s an app-based driver: “I’m a busy single mom, and the flexibility of app-based driving works for my family,” she says in the ad.

Many of the ads feature workers of color. Uber has put up billboards about racism. Lyft has run ads featuring the poetry of Maya Angelou and touting the company’s free rides for people who lack access to some essential services.

“You have very clearly crossed the line when you try to claim the equity mantle for a campaign that has always been about allowing multibillion dollar app companies to write their own law so they can keep exploiting the drivers,” Lee said.

Gig companies are spending money to spread the message in other ways beyond ads. Instacart had workers at a Bay Area store put pro-Prop 22 stickers in customers’ orders. DoorDash is providing pro-Prop 22 food delivery bags to restaurants.

And then there are emails.

“Yes, I get emails every day from Uber and from Lyft,” said Uber driver Hector Castellanos.

Last month Castellanos said he started getting a pop-up in his app. It said Prop 22 is progress. Even though he’s against the proposition, he said he had to click either “yes on Prop 22” or “OK.” There wasn’t a “no” option.

“It’s coming up this pop-up every time I turn on my app or I drop off a passenger,” he said.

Uber spokesperson Davis White said Castellanos’ experience is not the norm, that drivers should’ve only seen the pop-up once per shift, and that the pop-up has been changed so drivers can just close it.

Sonoma State University political science professor David McCuan said other companies with apps are watching to see how they can be used to sway voters.

“It is the holy grail of political communication … and so businesses and opponents are learning from what is happening through the power of your phone,” he said.

McCuan said the widespread use of apps in this proposition is unprecedented, but that we could be seeing a lot more of it in elections to come.