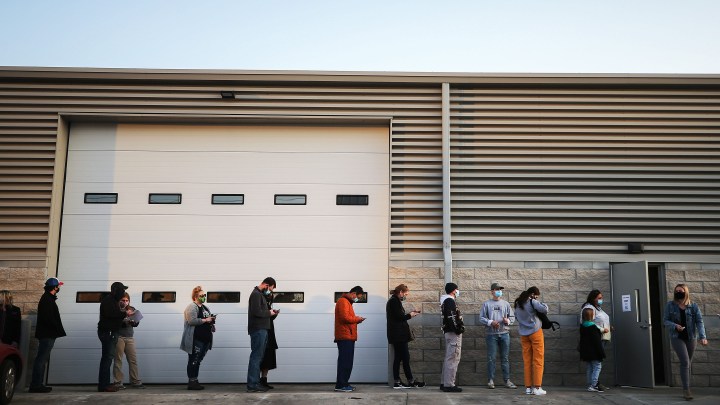 COPY
"A lot of these businesses know that it's within their business interest to make sure that people can participate and vote," says Vote.org CEO Andrea Hailey. Mario Tama/Getty Images
Business of Voting

"A lot of these businesses know that it's within their business interest to make sure that people can participate and vote," says Vote.org CEO Andrea Hailey. Mario Tama/Getty Images
Listen Now

The number of early votes cast before Election Day 2020, as of Nov. 1, neared the 100 million mark according to data aggregated by the U.S. Elections Project, which is close to the complete voter turnout in the 2016 general election.

While voter turnout for 2020 may very well eclipse 2016’s turnout, general turnout in the U.S. has historically been relatively low compared to other OECD member nations.

The nonprofit Vote.org, however, has been focusing on one specific way to bump up voter turnout this year: convincing companies to give their employees paid time off on Election Day.

“Election Day should be a holiday,” Andrea Hailey, CEO of Vote.org, told “Marketplace Morning Report” host David Brancaccio. “And until we have a government that is really excited to make it so, I think it’s on corporate leaders. People don’t want to choose between their paycheck and having a voice in their democracy.”

Below is an edited transcript of Brancaccio’s interview with Hailey about Vote.org’s Election Day off campaign, why some private companies are participating and other potential solutions to get more voters, young and old, to cast their ballots before voting ends on Nov. 3.

David Brancaccio: So one of the things is, we tend to vote on a work day and there are people who’ve got to work.

Andrea Hailey: Absolutely. We know that a large reason why many people do not participate in elections is that they either have work or school conflicts and that that’s cited over and over again by nonvoters as one of the largest issues and blockers, really, to their participation.

Brancaccio: I mean, let’s think this through. Because there are some people like, “Oh, come on, get it together, focus, organize yourself. Even though you’re working, get over to the polls.” But let’s say you’re going to do it early in the morning, and you get online early, but you have an early-ish meeting at 8 o’clock or 9 o’clock, you might be worried about missing the meeting for the early stretch. And then later in the day, there are other problems.

Hailey: Absolutely. And we know that polling locations across this country have been closed down ahead of this election. And so that presents extra challenges, which means extra long lines for voters. This isn’t even theoretical, for me, this is practical. The polling location closest to me in Indianapolis, Indiana, has been experiencing four- to eight-hour wait times. So when you’re talking about standing in line that long, you really have to have the privilege of being able to set your own schedule. It can be really difficult and people don’t want to choose between their paycheck and having a voice in their democracy.

Brancaccio: So you’d like to live — I was about to say in a world — but in a country, at least, where we had the day off. Maybe we even got paid to have the day off on Election Day?

Hailey: Absolutely. I mean, Election Day should be a holiday. And until we have a government that is really excited to make it so, I think it’s on corporate leaders and companies, who also have a stake in there being a healthy and thriving democracy, to go ahead and give a paid day off for Election Day and for election participation. And I think that that would take out an immediate barrier for many, many people. People could go ahead and commit to standing in those lines or filling out their ballot. And having that paid day off would be crucial to allowing people to participate and allowing workers to participate.

The costs of making Election Day a holiday

Brancaccio: But, you know, I mean, it would not be free for the companies if they added a whole other holiday to the year. I mean, it’s not trivial.

Hailey: That’s true. There is a cost to adding, you know, Election Day as a holiday. This year at Vote.org, we’ve had over 900 companies participate in our Election Day off, paid day off program. And for those companies, they really are, you know, deciding that they have a stake in building out their communities and building out a healthy and thriving democracy in their communities. And so we’ve seen companies like Apple and Shake Shack and T-Mobile participate — companies like Ralph Lauren, participate this year in giving a paid Election Day off. It isn’t free for them. There’s definitely a cost, especially when you’re talking about the service industry and retail. But there’s also a cost to not having healthy democracy. A lot of these businesses know that it’s within their business interest to make sure that people can participate and vote.

The challenges of online voting from home

Brancaccio: Now another way to approach this and increase participation in the vote, of course, would be to let you do it through some kind of device from home. Now, I’ve been covering this off and on for years, the idea of using maybe the internet to vote. But, you know, the challenge is — besides the potential for hacking — the challenge is, you know, we want people’s vote to count, but the other piece of this is we’re promising privacy. We don’t want people’s vote, how they voted in the end, to somehow be out there available to prying eyes.

Hailey: That’s right. First of all, our election systems are antiquated, but we have to work with the systems that we currently have in place for the reasons you just named. We want to make sure that everything is, you know, safe and secure. And so I think that the real answer to making this experience, voting experience, more convenient for everyone is expanding mail-in voting, expanding early vote days, giving voters a better, you know, customer experience, if you will.

Brancaccio: In our most recent Marketplace-Edison Research Poll, we asked people many things about their economic anxiety and so forth. We did ask about voting intentions. And people 18 to 24, and people 25 to 34, for instance, 60% or more of them said they would definitely vote. But look at this: 18 to 24, more than 7% said definitely not, and 25 to 34 years old, 7.6%, definitely not going to vote. And I suppose some of this is what we’ve been talking about, the fact that they’ve got to work or something.

Hailey: Yes, part of it is that people have to work, people don’t want to choose between their paycheck and their democracy, between their health and their democracy. But the other issue is that people have been disincentivized from participation. A lot of people feel like their voice, especially in the younger generation, doesn’t count. And what we also forget is that both Republicans and Democrats reach out to what they call the most likely voters to ask for their vote. And that means somebody who already has a voting history. Young people are less likely to have a voting history. And in this country, we don’t have a great way of on ramping people into democracy. So you turn 18 and no one’s necessarily going to sit down with you and tell you how to register and take you through the process. So, I mean, I’m for automatic registration of people once they turn 18. And I think that we have to rethink civic education in this country and think about how we ask people to participate in their democracy.

Brancaccio: Back to the point about maybe some sort of more formal system to get people registered as soon as it’s legal. I mean, young men, the selective service, we have to register for the draft and it’s mandatory. And we could set up systems that get people registered in a little bit more organized way.

Hailey: Yes, the DMV was never meant to be the bedrock of U.S. democracy. There’s a better way to go ahead and register people when they’re turning 18 than we currently have. And I think that’s something that, long term, we’re all going to have to take a look at and do a better job of solving. I mean, you know, leading up to this presidential election, this year, 4 million people turned 18. So this is, you know, a large number of people. And now when you’re talking about millennials and Gen Z, they’re the largest voting bloc in America when they show up. So there’s quite a bit of power there. And we know that when somebody shows up in two elections or more that voting becomes a habit and you’re likely to have a lifelong voter. Now, the good news here is that, in the midterms, we did see an increase in youth participation over previous years, and we’re seeing an increase in youth participation in early voting right now. So it’s highly likely that, in the last few years, there has been an on-ramping of a high number of young people into our democracy. And that’s really exciting.

Brancaccio: And when given the opportunity, I do try to point out to people that it is a political strategy to try to persuade people who you think will vote against your favorite candidate to just not vote, that that is a strategy.

Hailey: Absolutely. There are a lot of people with an interest in young people not voting. When we had increased youth participation in the midterms, the average age of Congress dropped by a decade. Things change and priorities change, generationally. And so, you know, I think that when politicians have to be accountable to a younger generation, the younger generation has a different view of where they would like things to go. So yeah, absolutely. There are a lot of people with entrenched interests in not encouraging youth participation. But, at the end of the day, we know that in 2016, 100 million people did not show up to vote. And we know that we can’t have a healthy democracy when that is the case and when people don’t know how to get involved, when they don’t have the information they need, when they don’t have the time off they need. I think it’s super important that we figure out how to revitalize our democracy both at the state level and community level, and then federally.