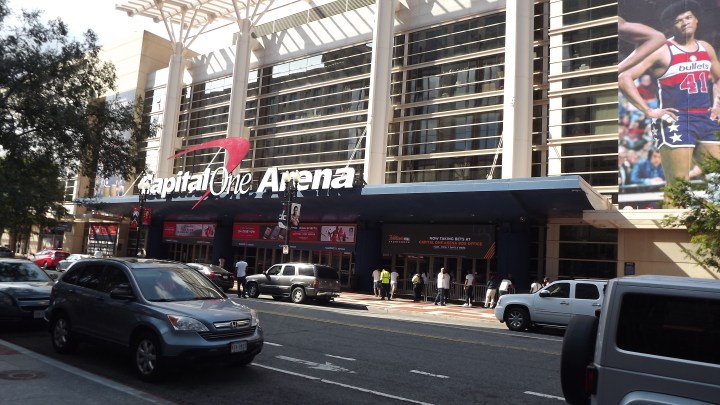 COPY
The Capital One Arena in Washington, D.C., is one of many sports arenas across the country that will be converted to voting "supercenters" for the November elections. Kimberly Adams/Marketplace
Elections 2020

The Capital One Arena in Washington, D.C., is one of many sports arenas across the country that will be converted to voting "supercenters" for the November elections. Kimberly Adams/Marketplace
Listen Now

Voting has already begun in some states for the presidential election, and many analysts expect record voter turnout this year. Many people will vote by mail for the first time in light of the ongoing pandemic, but cities and states are still preparing for a spike in in-person voting on early voting days and on Nov. 3.

Given social distancing needs in the pandemic, many communities are embracing a new kind of polling place — the voting “supercenter.” The push to turn arenas and stadiums into polling places started months ago, with the help of the Election Super Centers Project, but has picked up steam since NBA players demanded the league get on board with the effort.

“The professional sports teams and colleges, when they’re getting involved, are essentially donating those facilities,” said David Becker, executive director of the nonprofit Center for Election Innovation and Research. “And that might mean volunteering some of their staff and personnel to help out.”

That could include staff to direct crowds, keep bathrooms stocked and provide general maintenance to allow poll workers to focus on voters.

“There’s some real advantages in the sense that these stadiums and arenas tend to be on public transportation routes,” Becker said. “They’re very large; they can accommodate social distancing. They have really good power and lots of outlets that machines can be plugged into.”

The Capital One Arena in Washington, D.C., is one such site. It sits right on a hub of D.C.’s metro system and is empty of fans during the pandemic. Monumental Sports & Entertainment, which owns the arena and the WNBA’s Washington Mystics, the NBA’s Wizards and the NHL’s Capitals, is working with the D.C. Board of Elections to turn a concourse that runs the length of a city block into a polling place, roughly five times the size of some of the city’s largest pre-pandemic polling sites.

In normal times, renting out the arena could cost upwards of a $100,000 a day, but for the election, the company is basically donating the space.

“In a typical end of October, early November, we are packed with two teams and other special events, but we don’t have anything right now,” said David Touhey, president of venues at Monumental. He added that the polling place will use just about one-sixteenth of the arena’s space. “So the lift is low for us,” he said.

This is one of five voting supercenters that will be opening in Washington for the election, according to D.C. Board of Election Chair Michael Bennett. He said others will include the baseball stadium, university gyms and big convention hotels.

“With the voter turnout that we think that we’re going to have, these will all be needed,” Bennett said.

Even with the additional sites, the city is encouraging residents to vote by mail, and Bennett asked the D.C. government to provide him with an additional 120 people to help process those ballots, one of many additional costs to running an election in a pandemic. The city has to provide cleaning supplies and PPE for poll workers, plus more voter education than usual.

“We’re doing a lot more advertising, a lot more focus on ensuring that people know where to go and what to do to make sure that the voting is as simple and smooth in the process,” Bennett said.

At least 20 NBA teams plan to turn their facilities into polling places for the November elections.

Correction (Sept. 11, 2020): An earlier version of this story incorrectly identified the teams that play in the arena.