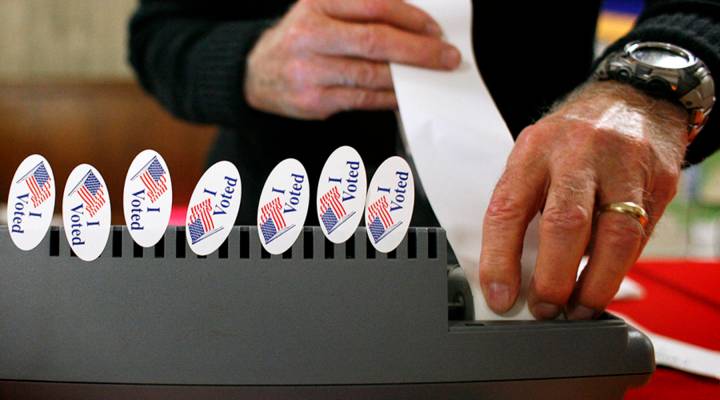 COPY
A pollster loads paper into a primary registration machine at the Travis County Courthouse in 2008 in Austin, Texas. Ben Sklar/Getty Images

A pollster loads paper into a primary registration machine at the Travis County Courthouse in 2008 in Austin, Texas. Ben Sklar/Getty Images
Listen Now

At Tuesday’s American Music Awards, Taylor Swift repeated a plea she’d made earlier to her 112 million followers on Instagram: Register and vote. Swift is the latest celebrity to join what’s been a concerted effort this year to boost voter registration among young people.

Just over 20 percent of 18- to 29-year-olds voted in the last midterm election in 2014, according to the Center for Information and Research on Civic Learning and Engagement. Turn out among young voters has traditionally been lower than that of other groups.

That’s partly because of how campaigns target their outreach, says Clarissa Martínez-de-Castro, deputy vice president at Unidos US (formerly National Council of La Raza). She said campaigns often focus spending on so-called likely voters, or those who have voted in previous elections.

“So what that means is young voters, who are obviously arriving into the electoral process and are not going to have a voting history,” are not targeted, said Martínez-de-Castro. “For communities like the Latino community, who is a young community, they simply don’t end up [as] the outreach target of many of those campaigns until very late in the process, if at all.”

But this year looks different. Several groups, especially on the left, say they’re spending more money and paying more attention to voter turnout, including among young voters. The NAACP, which concentrates on outreach to African-Americans, said contributions are up 400 percent compared to 2016, with “more donors, foundations and individuals who want to invest in the NAACP to mobilize and amplify the black vote.”

The League of Women Voters said in an email that “interest in registration has been HUGE this year.” The group usually sees a drop-off in donations after an election. But that didn’t happen after the 2016 presidential vote, and donations were up in 2018.

Most of the Republican groups we contacted did not respond to requests for details on youth voter outreach efforts. But David James of the Republican Senate Leadership Committee said in an email statement that the group is focused on “candidates and state caucuses that win.”

“There’s no one size fits all,” said DuHaime, “but you do see activities, local events or fairs and mailings to voters who’ve just turned 18. You do see some of those activities being done.”

The most concerted and well-funded efforts to get young people to the polls this midterm cycle tend to come from the left. It started with the primaries, said Tom Bonier, CEO at TargetSmart, a Democratic voter data firm that’s been tracking youth engagement in the midterms. “Now you’re seeing the focus shift and the resources shift into the general election,” he said.

Bonier said there was a particularly big spike in voter registration after the Parkland shooting and the subsequent March for Our Lives, where “Vote them out!” was a common refrain. In fact, youth voter turnout in the primaries was up by 4 percent nationwide. According to Bonier, turnout doubled or tripled in some competitive races.

And now, with the general election just weeks away, voter registration and turnout efforts are reaching a fever pitch. Progressive group NextGen America, founded by billionaire Democratic activist Tom Steyer, is spending more than $30 million to register and turn out young voters.

Ben Wessel is director of NextGen Rising, the youth voter outreach division of NextGen America. He said there’s a reason most of the investment targeting younger voters seems to be coming from the left.

A new poll by CIRCLE predicts “unusually high levels” of youth voter turnout for a midterm, with 34 percent “extremely likely” to vote, and 45 percent of those polled would vote for Democrats.

We’ll see how all that works out in just a few weeks when the polls open.