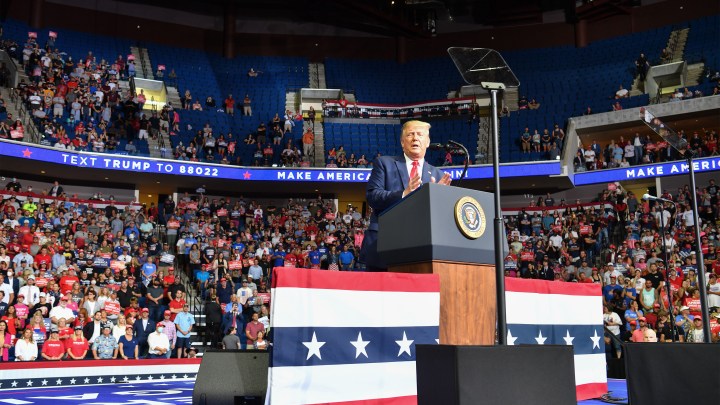 COPY
The upper section of the BOK Center in Tulsa, Oklahoma, is partially empty as President Donald Trump speaks at his campaign rally on June 20. Nicholas Kamm/AFP via Getty Images
TikTok

The upper section of the BOK Center in Tulsa, Oklahoma, is partially empty as President Donald Trump speaks at his campaign rally on June 20. Nicholas Kamm/AFP via Getty Images
Listen Now

President Donald Trump’s campaign rally in Tulsa, Oklahoma, this weekend attracted fewer than the expected number of attendees. Concerns about COVID-19 likely kept some people at home, but TikTok users and online fans of K-pop are giving themselves some credit, too.

They reserved tickets to the event with no plans to show up. Whether that prank really depressed turnout is up in the air, but one thing it did accomplish was feeding the Trump campaign a whole lot of bad data. And that is probably going to cost the campaign some money.

Between the campaign on TikTok and the mobilization of K-pop fans across social media, the Trump campaign now likely has tens of thousands — maybe even hundreds of thousands — of people in its database who are not likely Trump voters, potentially corrupting the database the campaign uses to track supporters.

“The kind of voter turnout models that have been built need accurate data for two things,” said Anjana Susarla, a professor at Michigan State University’s Broad College of Business. “One is they need it for voter turnout and also in persuading the persuadable voters.”

Campaigns spend money on text message and email blasts to reach those persuadable voters and to avoid wasting money on fake supporters. They have to spend money to weed them out.

“You’re asking a data vendor to clean it, try to make a match on something like email and ZIP code,” said Lucy Caldwell, a political data strategist who’s worked with Republican campaigns, including Trump primary opponent Joe Walsh. “Then you match it back, you’re probably spending between three and 15 cents a person.”

And the Trump campaign can afford it. According to the Center for Responsive Politics, in April the campaign had more than $107 million cash on hand — almost double that of the Biden camp. The gap narrowed in May, with Trump’s campaign holding $108 million in cash to Biden’s $82 million.

Plus there’s the money and infrastructure of the Republican National Committee.

“We have invested over $300 million over the last several election cycles,” said Liz Harrington, a spokesperson for the RNC. “That all goes directly into keeping those voter files up to date. And as much as accurate as possible.”

Harrington said the “vast majority” of signups for the Tulsa rally were real. Plus, with the data Republicans already have, she said it should be easy to sort the Trump fans from the K-pop stans.