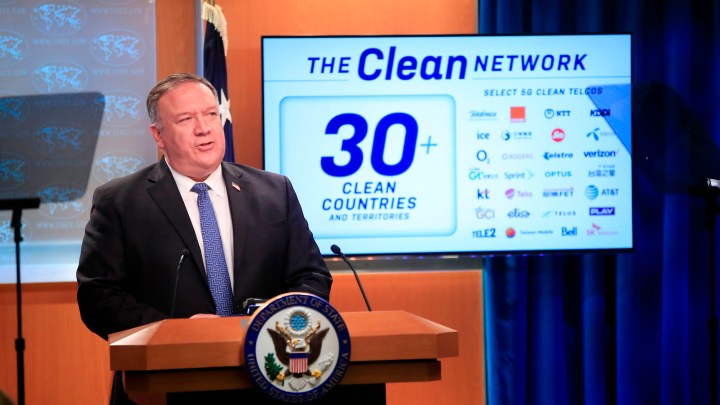 COPY
Secretary of State Mike Pompeo has laid out an expansive plan to keep out entire categories of Chinese tech: apps, data storage, internet and phone services. Pictured: Pompeo speaks during a news conference at the State Department on Aug. 5, 2020. Pablo Martinez Monsivais/Pool/AFP via Getty Images

The Trump administration is taking more steps to try to build a technology wall against Chinese companies. Secretary of State Mike Pompeo has laid out an expansive plan to keep out entire categories of Chinese tech: apps, data storage, internet and phone services.

Marketplace’s Scott Tong has more on this. The following is an edited transcript of his conversation with host Sabri Ben-Achour.

Scott Tong: That is so last week, Sabri. The rationale is that the U.S. needs “clean networks” to guard Americans’ data and the secrets of U.S. companies. So what’s the plan? To remove “untrusted” Chinese apps from Apple and Google app stores, including TikTok and WeChat, the dominant communications app in China, to stop American apps from installing on Chinese-brand phones, to limit Chinese cloud-service companies from accessing data here and to protect data on undersea cables from China.

Ben-Achour: OK, this is a long list, do we have any details on how the government will pull this off?

Tong: No, we don’t really have any details on that or if these bans are binding on American tech companies. We’re talking Apple, Google, every American app, our phones and internet companies.

Ben-Achour: And just briefly, what’s the evidence these Chinese tech firms are harmful?

Tong: We’re still waiting for that in many cases. With Huawei, the government has yet to produce a smoking gun. Same with TikTok. Surely there’s evidence of hacking into networks — all countries including China, including the U.S., do that. As far as Beijing goes, it calls this U.S. technology protectionism.