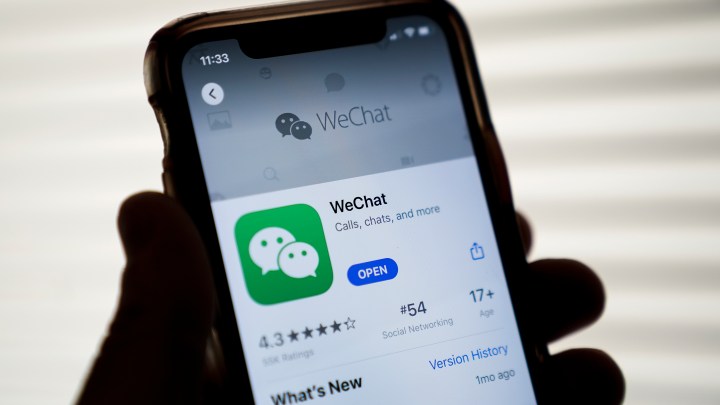 The Trump administration is moving ahead with a ban on the use of the messaging app WeChat in the United States starting this coming Sunday night.

The ban was proposed in August, but the order for ByteDance of China to divest the U.S. part of the social media company TikTok seemed to attract more attention and coverage. TikTok is also facing a mobile app store ban, and could face a more complete ban by November.

The Commerce Department says, starting Sunday, neither can be downloaded or updated in the U.S. The Trump Administration contends the apps capture large amounts of data from American users and that data could be accessed by the Chinese government.

Trump’s threats to ban the apps sent ByteDance racing to find an American partner for TikTok. Oracle has emerged the winner, but the deal has yet to win the Trump administration’s approval, which could avert a ban.

WeChat, on the other hand, does appear headed for a ban. It’s owned by Tencent, the Chinese internet giant. It’s a very popular platform in that country, and U.S. companies use it to transact with Chinese customers.

But, as of Sunday, the Commerce Department says, WeChat cannot be hosted by U.S. companies, nor allowed to function here.