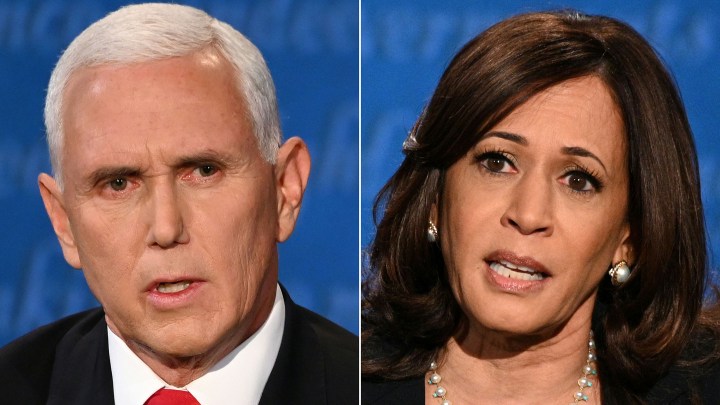 COPY
"President Trump and I have a plan to improve health care and protect preexisting conditions for every American," Vice President Mike Pence said. But he did not offer any further details. Eric Baradat, Robyn Beck/AFP via Getty Images
Elections 2020

"President Trump and I have a plan to improve health care and protect preexisting conditions for every American," Vice President Mike Pence said. But he did not offer any further details. Eric Baradat, Robyn Beck/AFP via Getty Images
Listen Now

Among the flashpoints in Wednesday night’s vice president debate: health care and the fate of the Affordable Care Act.

David Brancaccio: Nancy, how did Obamacare come up?

Nancy Marshall-Genzer: Sen. Kamala Harris was asked about abortion. But, as both candidates did throughout the debate, she decided to talk about something else: health care. She mentioned that the Supreme Court is set to hear oral arguments next month on the constitutionality of Obamacare. And she said the Trump administration would take away Obamacare’s protections for people with preexisting conditions.

Harris: If you have a preexisting condition — heart disease, diabetes, breast cancer — they’re coming for you.

Brancaccio: What did Vice President Mike Pence have to say about that?

Marshall-Genzer: He was asked directly by the moderator, Susan Page, how the Trump administration would protect people with preexisting conditions if Obamacare were struck down by the Supreme Court.

Pence: President Trump and I have a plan to improve health care and protect preexisting conditions for every American.

Brancaccio: But invited to give details by the moderator, he didn’t go there.

Marshall-Genzer: No, he did not. But as I said, both candidates bobbed and weaved last night. Harris had her own nonanswer when she was asked, actually by Pence, if a Biden administration would “pack the court” — that is, make the Supreme Court bigger so Biden could appoint more justices. Harris never answered that, instead saying President Trump should allow whoever wins the November election to choose the Supreme Court justice who will replace Ruth Bader Ginsburg.