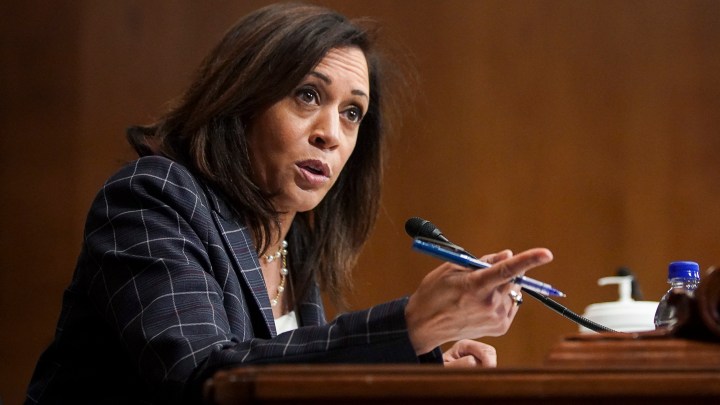 California Sen. Kamala Harris, a Democrat, is Joe Biden’s partner now in the race for the White House. It’s a historic moment, with Harris being the first Black woman and the first person of Indian descent to be nominated as a major party candidate for vice president.

Aimee Allison, founder and president of She the People, a national organization focused on nurturing the political power of women of color, says that if the Democrats win the White House in November, she sees Harris “as being in a co-governance, very crucial role.”

“We’re entering this era where Kamala Harris, and the women of color in the base of the party that she represents, are going to go into the first hundred days and into governing with a very distinct and powerful governance vision,” Allison said.

She spoke with “Marketplace Morning Report” host David Brancaccio and the following is an edited transcript of their conversation.

David Brancaccio: I have a question about how organizations confer power to executives. It could be a corporation, but in this case, the White House. There are several kinds of vice presidents. There are the ones who are integral members of the real circle of power. And then there are those vice presidents whose voices might be more marginalized. What do you think happens here if the Democrats [win the White House]?

Aimee Allison: I see Sen. Kamala Harris as being in a co-governance, very crucial role. I think her role as VP candidate, in the next 80 or so days, is reaching out and engaging the must-win voters. But, also, we’re entering this era where Kamala Harris, and the women of color in the base of the party that she represents, are going to go into the first hundred days and into governing with a very distinct and powerful governance vision.

Brancaccio: Now, Joe Biden has this slogan “Build Back Better,” which is about not just returning the economy to the way it was where there were structures that keep people down and privilege others. As a practical matter, Kamala Harris as vice president could play a role, you think, in shepherding those economic policies?

Allison: The fact of the matter is economic policies with the support of the majority of the Senate and the House, first and foremost, that could encourage her colleagues to support direct cash payments. She’s been pushing legislation on the Senate side for a $2,000 a month payment for Americans during the pandemic and student loan forgiveness. But she also can be a champion for a more complex understanding of the drivers of the American economy. I mean, racial justice is a key economic issue. And what we’re seeing is that she, in the wake of the protests that are calling for reckoning with America racism, has been able to facilitate a conversation, which is to understand economic policy in the context of policies that have limited the economic futures of people of color.

Brancaccio: The National Urban League is among organizations enthusiastically endorsing the choice of Kamala Harris. I mean, some voters often younger, I’ve talked to them, often Black think Harris in her roles in California was too focused on throwing people in jail and not focused enough on dealing with the inequities that can lead some people to prison. How much of a liability will this be for the Biden-Harris ticket on election day — that perception of Sen. Harris?

Allison: On a number of different levels, she’s adopted a stance — in terms of policy stance — that’s evolved. The Justice in Policing Act is is a demonstration of that. Look, all over the country, I’m hearing excitement that women of color, Black women, see themselves in the campaign more deeply and are willing to roll up their sleeves and go to work. And part of that is understanding who she is in this moment and the important role that she’ll play in unifying the Democratic Party coalition. The criticisms aside, it is quite a thing to have a representative from the most powerful, loyal, Democratic voting force at the top of the ticket. And I think it’s it bodes well for Biden and the efforts to recapture the White House.