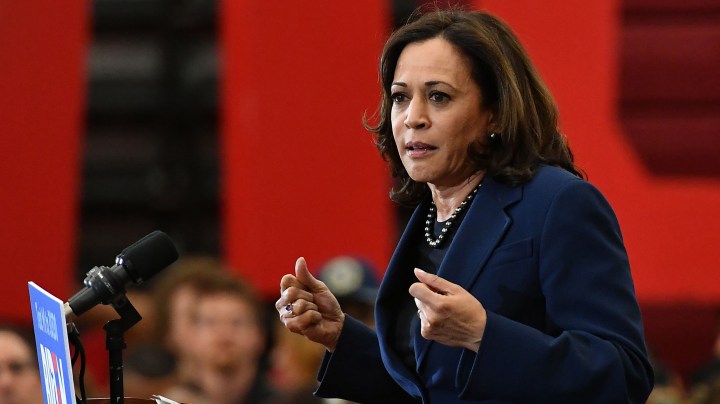 Update (August 19, 2020): At the mostly virtual Democratic National Convention on Wednesday, Sen. Kamala Harris, D-Calif., will give a speech accepting her party’s nomination for vice president.

Harris is the first Black woman, the first Indian American and only the third woman in U.S. history to be nominated as a vice presidential candidate for a major party. Research shows though decisions to diversify the ticket impact more than just the politics of getting elected.

Overall, women remain underrepresented in political leadership, according to the United Nations. Just 21 women serve as heads of state.

Shannon O’Connell has worked on a number of campaigns for female candidates, and is now a director at the Westminster Foundation for Democracy. She spoke with the BBC’s Victoria Craig, and the following is an edited transcript of their conversation on the global edition of the “Marketplace Morning Report.”

Shannon O’Connell: What we’re finding in our research is that when women move into formal leadership positions, they do bring a very different leadership style and a different perspective, as well as different priorities. So they tend to be more consultative and inclusive in their styles. And we know from effective policymaking that consultation and bringing in evidence tend to deliver better outcomes in the long term anyway. And that approach seems to be very organic to most women. And certainly you saw that in the COVID response, [New Zealand Prime Minister] Jacinda Ardern’s efforts to even reach out to children and bring them into understanding of the policy response was a very good example of that.

Victoria Craig: So given these examples of some of these successful female leaders, why do you think the U.S. is so far behind in putting a woman in one of the top jobs?

O’Connell: So we also know that political culture makes a difference in the extent to which women are able to exercise their leadership in a way that is authentic to them. The norms, the standards, the cultures, the practices all affect whether or not women are perceived as legitimate for being able to exercise leadership the way they actually want to. And in the U.S., and quite possibly in a growing numbers of countries at the moment, the consultative approach that we talked about, having a more cautious approach to policies and issues that have a high element of risk, these aren’t being rewarded at the moment. They aren’t being perceived as desirable in a lot of places, in Russia, in the Philippines, in Brazil and Turkey. So there has been an element of this emerging globally, but the U.S. has always been a bit of its own culture, in part because the electoral system is all “first past the post.” So it doesn’t nurture a more collaborative approach, or collective decision-making, or working in unified parties, or working in unified coalitions.

Craig: As you sort of point out some of these words that we’re using here: compassion, adaptability, resilience, these have all been traditionally viewed as sort of soft power traits. But do you think that there is a shift in focus now — not just in the U.S., but globally — that those are traits that are essential for any leader, not just for women in the top job?

O’Connell: I think that the traits that you mentioned are absolutely essential. And we are seeing that when we are able to look at what happens over the longer term. We know, for example, that when some of those considerations are brought to leadership styles, that you do get better outcomes. But you also get higher levels of the type of stability that can lead to economic growth, better public health outcomes, people not only living longer, but spending more years in good health. So bringing that type of perspective that you mentioned, does make a substantive difference in the lives of people and the well-being of nations.

There are some fantastic examples from about 25 years ago when the Beijing Platform for Action was first introduced, and we started to look at structural changes to bring women in, really, proactively for the first time. And the types of questions that began to be asked in legislative committees that were not asked before. There’s a great story in the U.K. Parliament of Harriet Harman being put on the defense committee and the heads of the armed services being asked, for the first time ever, about the well-being of military families. And they suddenly realized that that was actually important to the resilience and the effectiveness of the armed services overall. If their families were doing well, the service members were doing well, and that had a knock-on effect of things like value for money, and effectiveness, and stability.

Craig: So do you think as vice president Kamala Harris could affect some of these changes in U.S. politics? Obviously, the president sets the agenda, but she could take ownership of certain issues and projects and sort of make her mark on really changing the way U.S. politics works.

O’Connell: Kamala Harris could make a very big difference in the way politics are conducted in the U.S., I think not only in specific policy areas, which I imagine she will take up based on her professional history and the type of work that she has done as attorney general in California and as well as senator, but also, I think, in the type of style that she brings to her work as vice president to, again, bring in some of these longer term, broader perspectives, shifting priorities, asking different questions, getting different people in the room, making decision-making more inclusive and less exclusive and making it less about zero-sum games and more about collective gains.