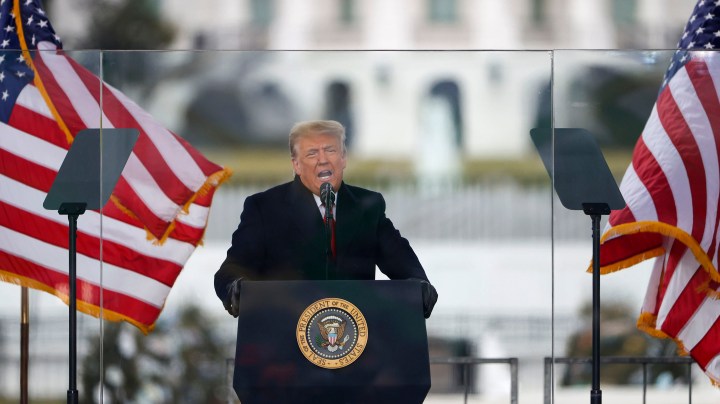 COPY
Some of them were among Trump’s biggest supporters, and one influential business group is calling for Trump's early removal. Tasos Katopodis/Getty Images

Some of them were among Trump’s biggest supporters, and one influential business group is calling for Trump's early removal. Tasos Katopodis/Getty Images
Listen Now

Business groups and corporations are condemning President Donald Trump after the violence at the Capitol Wednesday. Some of them were among Trump’s biggest supporters, and one influential business group is calling for Trump’s early removal, using the cabinet’s and the vice president’s constitutional authority.

Marketplace’s Nancy Marshall-Genzer has more from Washington. The following is an edited transcript of her conversation with “Marketplace Morning Report” host David Brancaccio.

David Brancaccio: Nancy, let’s start with one of the biggest organizations, the National Association of Manufacturers.

Nancy Marshall-Genzer: It’s a huge lobbying group that represents thousands of manufacturers large and small. Some of its biggest members are Pfizer, Toyota and Exxon.

Brancaccio: What did the association say in its statement?

Marshall-Genzer: It didn’t mince words, David. The statement said “this is sedition and should be treated as such.” And the association called for the president to be removed under the 25th Amendment.

Brancaccio: And what did other business leaders have to say?

Marshall-Genzer: We heard from the likes of Jamie Dimon, CEO of JPMorgan Chase. Goldman Sachs issued a statement. Also the head of the giant private equity group Blackstone, Stephen Schwarzman, said the outcome of the election is very clear and there must be a peaceful transition of power. Schwarzman is a major Republican donor.

General Motors CEO Mary Barra tweeted that “it’s imperative that we come together as a country.”

Of course, a peaceful transition is key to a functioning economy. And businesses are already looking ahead to the Biden administration, anticipating more relief checks, which could give the economy a boost.