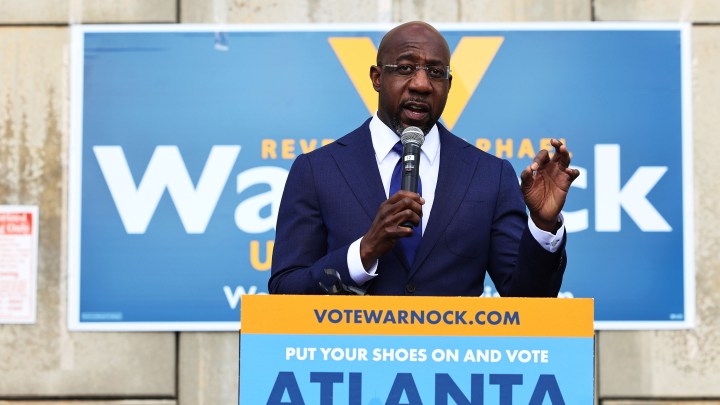 Money is moving in response to voters in Georgia giving strength to Democrats. Democrat Raphael Warnock won one of Georgia’s two Senate runoffs Wednesday, becoming the first Black senator in his state’s history and putting the Senate majority within the party’s reach.

In the second race, between Republican Sen. David Perdue and Democrat Jon Ossoff, the candidates were locked in a tight race as of Wednesday morning and it was too early to call a winner.

These results are suggesting to market participants there could be more economic relief to pull the U.S. out of its COVID recession.

“The markets are starting to price in the risk of a 50-50 Senate, which the markets now believe will allow the Democrats enough room to be able to launch some additional spending packages,” said Paul Christopher, head of global market strategy for Wells Fargo Investment Institute. “And that would generally inject quite a lot of federal money into the economy.”

Those expectations gave way to a series of corresponding moves in markets before the opening bell on Wednesday.

First of all, interest rates: The benchmark interest rate, the yield on the U.S. government’s 10-year note has crossed 1% for the first time since March. The equation is that more federal money in the economy requires more new debt issued by the U.S government.

Listen below for David Brancaccio’s full interview with Paul Christopher from the “Marketplace Morning Report” below:

And stock index futures have also shifted in telling ways. Nasdaq futures, for an index comprised of mainly tech stocks, hovered around -1.5% throughout the morning, as fear of higher corporate taxes and tougher regulations weighed on Wall Street.

Then there’s the Russell 2000 index, an indicator of smaller companies. Futures there have been up, jumping more than 2% at one point, partly on bets, again, of more economic relief.

“Not just more stimulus and more support during the pandemic for businesses that are strained because of the lockdowns and restrictions on activity, but also think about companies that would be involved, let’s say, as contractors or subcontractors,” Christopher said.

Karen Petrou, managing partner of the Washington-based economic consulting firm Federal Financial Analytics, said all of this points to markets taking the “fundamental lesson” that Congress is turning a new page on the divisions and dysfunction we’ve come to expect.

Listen below for David Brancaccio’s full interview with Karen Petrou from the “Marketplace Morning Report”:

The issues that the moderate middle may consider include runaway deficits and infrastructure spending for sustained economic growth — “not for more COVID, one-off checks, the so-called sugar highs,” Petrou said.