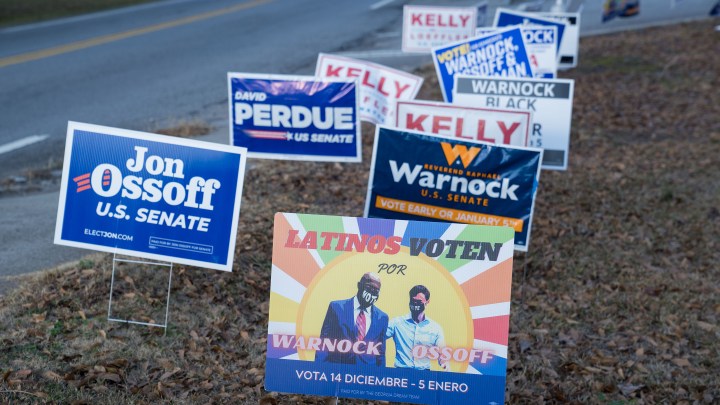 COPY
Democrat Jon Ossoff has raised the most money in direct donations to candidates so far, according to the latest Federal Election Commission reports. Megan Varner/Getty Images

Democrat Jon Ossoff has raised the most money in direct donations to candidates so far, according to the latest Federal Election Commission reports. Megan Varner/Getty Images
Listen Now

Money poured into Georgia during the campaigning for the Senate runoff election. Among the many sources, a notably large chunk came from Wall Street.

Marketplace’s Nancy Marshall-Genzer continues to follow the story. The following is an edited transcript of her conversation with “Marketplace Morning Report” host David Brancaccio.

David Brancaccio: Nancy, who were these donors, and who got their money?

Nancy Marshall-Genzer: The money came from the real estate business and also from banks and hedge funds. They mainly gave to super PACs supporting the Republican candidates, incumbents Kelly Loeffler and David Perdue. The top donor so far is Blackstone Group CEO Stephen Schwarzman. According to the Center for Responsive Politics, he gave $15 million to the Republican Senate Leadership Fund. Republican groups also got donations from banking heir Timothy Mellon and the chairman of Fox, Rupert Murdoch.

Brancaccio: Did Democrats get any of this money?

Marshall-Genzer: Yes. The Center for Responsive Politics says hedge fund manager Stephen Mandel gave a million dollars to American Bridge 21st Century, a political action committee aligned with the Democrats. The CEO of Netflix, Reed Hastings, and his wife Patty Quillin also gave a million dollars to a different Democratic PAC. But most of this Wall Street money went to Republican PACs.

Brancaccio: How about direct donations to the candidates?

Marshall-Genzer: According to the latest reports the campaigns filed with the Federal Election Commission, Democrat Jon Ossoff raised the most, more than $139 million. His fellow Democrat Raphael Warnock came in second, with Loeffler and Perdue trailing behind. But keep in mind, David, this isn’t all the money that was raised. The campaigns and super PACs still have to file post-election reports with the FEC. Then we’ll have the grand totals.