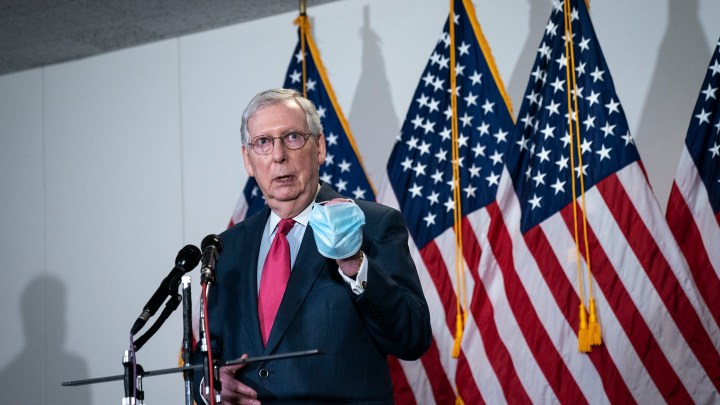 COPY
Despite having a bill, Senate Republicans themselves remain divided on issues of spending and policy. Drew Angerer/Getty Images
COVID-19

Despite having a bill, Senate Republicans themselves remain divided on issues of spending and policy. Drew Angerer/Getty Images
Listen Now

There are now two competing plans from Congress for how to hold up the economy as the pandemic rages on, one from House Democrats, passed in May, the other from Republicans in the Senate — who despite having a bill still remain divided themselves.

How different are these plans? About $2 trillion different, and now comes the negotiation. White House officials are expected to be on Capitol Hill Tuesday to take part.

Marketplace’s Nancy Marshall-Genzer is following the news. The following is an edited transcript of her conversations with host Sabri Ben-Achour.

Sabri Ben-Achour: Nancy, let’s start with jobless benefits. How far apart are the two parties on that?

Nancy Marshall-Genzer: Democrats passed a bill of around $3 trillion in the spring that would continue the extra $600 a week unemployed workers are receiving through January. The Republican proposal released Monday would give the unemployed 70% of their most recent salary by this October, when state unemployment offices have had time to reconfigure their computer systems to do those calculations. Until then, jobless workers would just get another $200.

Ben-Achour: Is that likely to pass the full Congress?

Marshall-Genzer: Not the way things are looking right now. House Speaker Nancy Pelosi came out of a meeting Monday with Treasury Secretary Stevem Mnuchin and White House Chief of Staff Mark Meadows saying it was a good meeting, but they don’t have “shared values.” She said they’re trying to find some common ground. But they’re not there yet.

I talked to Marc Goldwein about this. He’s senior vice president at the Committee for a Responsible Federal Budget. He expects the parties to agree on a $400-a-week extra unemployment benefit. Goldwein says around two-thirds of unemployed workers are making more on unemployment with the extra $600 than they did when they had a job.

Marc Goldwein: And probably the smart thing to do, is to unwind it slowly and to reform it in ways that maybe a larger share of the money is going to both workers and nonworkers so there isn’t that major disincentive to return to the workforce.

Marshall-Genzer: Goldwein says right now the extra unemployment money is helping keep some people employed, because jobless consumers are spending more, giving the economy a boost and creating jobs. He says Congress just has to strike the right balance.

Ben-Achour: What are some of the other differences between the parties’ proposals?

Marshall-Genzer: Republicans included liability protections in their bill, protecting businesses, schools and hospitals from being sued if someone got COVID-19 on their property. Democrats have been more focused on protecting workers. 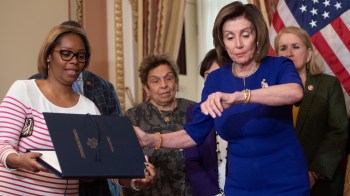 U.S. awaits deal on next round of COVID-19 response