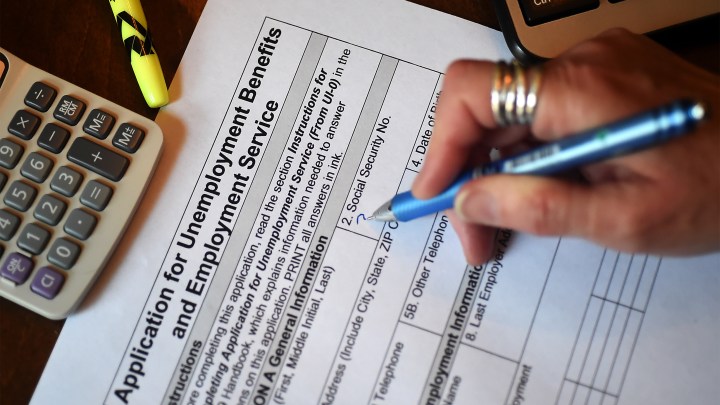 COPY
A person fills out an unemployment benefits application. The addition of $600 a week has enabled many Americans to keep spending and support businesses. Olivier Douliery/AFP via Getty Images
COVID & Unemployment

A person fills out an unemployment benefits application. The addition of $600 a week has enabled many Americans to keep spending and support businesses. Olivier Douliery/AFP via Getty Images
Listen Now

Chester Englander, in Ohio, is a musician for various symphonies. He has two kids and has been almost entirely out of work since March. So has his wife, also a musician.

They’ve been getting $1,200 a week in pandemic unemployment benefits.

“It’s not an exaggeration to say it kept us afloat. I mean we paid for food, we can pay our mortgage and property taxes,” he said.

“If we had done nothing, we would’ve thrown tens of millions of people out of work and given them no income. So they would’ve stopped spending anywhere near as much money on groceries. They would’ve quickly gone into defaults or arrears on mortgages,” said Josh Bivens of the Economic Policy Institute.

Bivens said one sign that people have been spending their $600 a week “was the last two months of really fast job growth we saw. We had some reopening of the economy, but then we also had people who had income.”

People like Englander, who said he has saved enough to pay two months of his mortgage — and for one month of food.