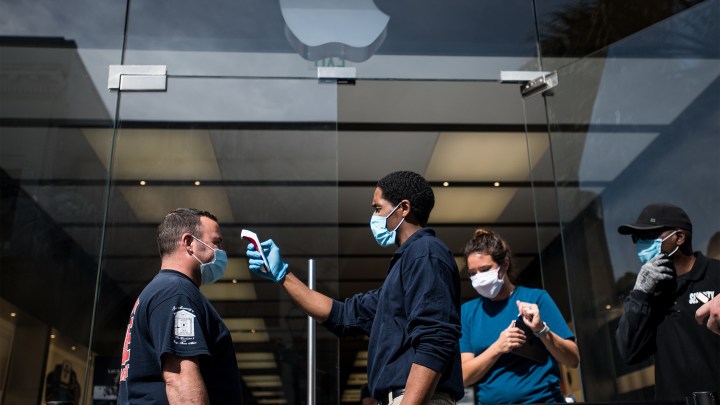 COPY
An employee administers a temperature check outside an Apple store. The government bonus paid to unemployed workers is scheduled to end at the end of this month. Sean Rayford/Getty Images
COVID & Unemployment

An employee administers a temperature check outside an Apple store. The government bonus paid to unemployed workers is scheduled to end at the end of this month. Sean Rayford/Getty Images
Listen Now

The Labor Department reported Thursday that another 1.3 million people filed for unemployment last week for the first time. More than 30 million jobless workers are now getting an extra $600 a week in benefits. That was part of the CARES Act, passed earlier this year.

But that additional money is set to end in a couple of weeks. A new study out Thursday from the JPMorgan Chase Institute looks at how the unemployed are spending that extra cash — and what would happen without it.

Fiona Greig wanted to know what was happening to the extra $600 a week unemployed workers are getting. Greig is director of consumer research at the JPMorgan Chase Institute, a think tank affiliated with the bank. Normally, Greig said, jobless workers receiving unemployment cut their spending by around 7%. So that’s what she was expecting. But she was wrong. Very wrong.

“What’s really surprising about this is we’re seeing their spending soar,” Greig said. “It’s soaring by about 10%.”

The study used JPMorgan Chase account data for about 61,000 anonymous households receiving unemployment. Greig said those households spent almost 73 cents of every dollar they received. Michele Evermore, with the National Employment Law Project, said that spending is keeping some sectors of the economy afloat.

The extra money is set to disappear at the end of this month, unless Congress renews it. Ernie Tedeschi, an economist at Evercore ISI, has been looking at how the entire economy would fare without it.

He said if it went away entirely, “that would be like taking out $80 billion a month in support from the economy. By the end of the year, the economy would be 2% smaller.”

Tedeschi said if Congress cut the $600 benefit in half and started giving the unemployed $300 extra a week, the economy would still contract — by 1%.

Correction: (July 17, 2020): A previous version of this story misstated the number of people currently receiving the extra $600 per week in unemployment benefits. The text has been corrected. 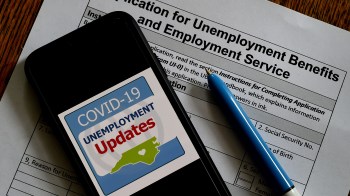