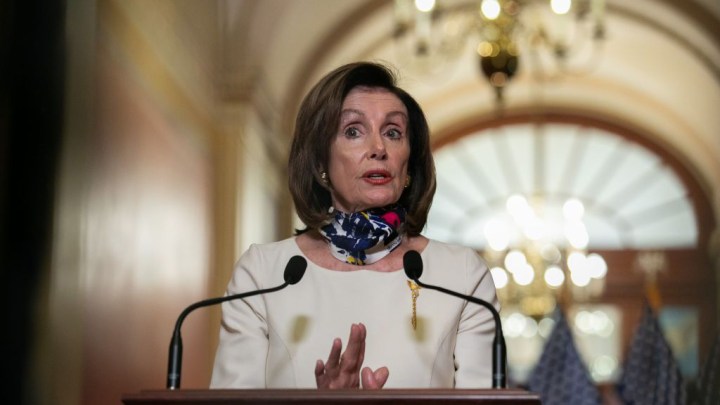 David Brancaccio, Scott Tong, and Alex Schroeder May 13, 2020
Heard on:

COPY
Both sides have their demands, but will Republicans and Democrats be forced by necessity to find a middle ground? Graeme Jennings/POOL/AFP via Getty Images
COVID-19

David Brancaccio, Scott Tong, and Alex Schroeder May 13, 2020
Heard on:

Both sides have their demands, but will Republicans and Democrats be forced by necessity to find a middle ground? Graeme Jennings/POOL/AFP via Getty Images
Listen Now

House Democrats have unveiled another stimulus bill that would double the amount of aid the federal government has already provided — to $6 trillion.

By most accounts this is an opening bid in a conversation on whether and how Washington should respond as some existing aid programs run out.

Marketplace’s Scott Tong has the details on the main components of this new stimulus.

“There’s a trillion dollars for state and local governments, which have been walloped because tax revenue hasn’t come in,” Tong told “Marketplace Morning Report Host” David Brancaccio. “The money would pay health workers, first responders, teachers at risk of losing their jobs.”

There’s also a second set of direct checks, on top of the initial $1,200 checks from this spring that were only meant to last one month, Tong said. The bill also extends extra benefits for the unemployed that are currently set to run out in July.

David Brancaccio: Now, a vote on this is scheduled for Friday, but Republicans in control of the Senate say this is going precisely nowhere, right?

Scott Tong: The rare window of bipartisanship in crisis is surely less open.
Senate Majority Leader Mitch McConnell calls this a “laundry list of pet priorities” on the left. But necessity could get the two sides talking. I spoke this morning with Mark Mazur at the Urban-Brookings Tax Policy Center. He thinks a next stimulus is “highly likely” because of how challenging things are.

Mark Mazur: I think if you look at the current economic situation, you’d be hard-pressed to say the U.S. is in a good place. I also think that if you look at the fiscal situation of state and local governments, it’s quite dire, and that it almost surely is the responsibility of the federal government to do something to help out.

Tong: Keep in mind the unemployment rate is now 1 in 7 Americans. That could become 1 in 5 before long.