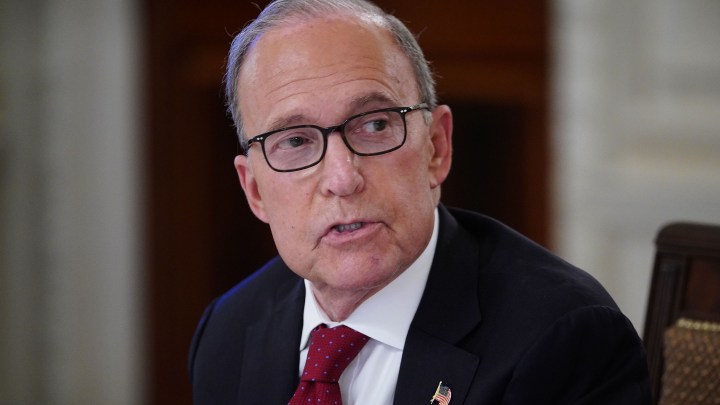 COPY
Kudlow says the Trump administration is looking at a potential bonus for people returning to work. Mandel Ngan/AFP via Getty Images
COVID-19

Kudlow says the Trump administration is looking at a potential bonus for people returning to work. Mandel Ngan/AFP via Getty Images
Listen Now

The Federal government has been supplementing state unemployment benefits during the pandemic by $600 a week at a time more than 20 million people are jobless.

Congress is now debating whether to extend the benefit, but the White House is worried it makes not working too attractive. White House economic adviser Larry Kudlow said Sunday on CNN the additional money is disincentivizing some workers from returning to their jobs.

David Brancaccio: What did Kudlow, the director of the United States National Economic Council, say this weekend?

Nova Safo: He said the Trump administration is considering whether to provide a bonus payment to people who go back to work. Congress is debating right now about whether to extend the $600 a week benefit. Democrats want to keep providing the money until January. But here’s what Kudlow said on CNN yesterday:

“We’re paying people not to work, it’s better than their salaries would get. And, that might have worked for the first couple of months. It’ll end in late July. We are — in the administration, the president — looking at a reform measure that will still provide some kind of bonus for returning to work.”

Brancaccio: Is this a supposition, or is there evidence people are blowing off jobs because of the extra unemployment money?

The Congressional Budget Office did look at the question. It’s previously said that low-wage workers have borne the brunt of job losses.

And looking at how extending the $600 benefit would impact workers, the CBO projected that, yes, fewer people will return to work, because they’ll be making more money if they stay home, at least in the short-term. But, it also concluded that extending the benefits would boost demand for goods and services, which in turn would help the economy.

We reached out to several labor economists for responses to Kudlow’s comments.

Here’s what they had to say:

Gary Burtless, senior fellow, economic studies at The Brookings Institution: “I think it is very likely that the generous $600-per-week top-up does indeed ‘disincentivize’ laid-off workers’ search for another job. Remember, though, this is partly by design, because lawmakers wanted to allow workers to remain safely at home, reducing the likelihood they would become infected by the COVID-19 coronavirus.

“Even though the very generous UI payment is reducing laid-off workers’ job search efforts and their willingness to accept (possibly unsafe) job offers, it is not clear whether this is actually reducing the number of job openings that employers can fill. In mid-May the unemployment rate was 13.3% (and possibly higher depending on how we count people who said they were employed but who were absent from their jobs). According to the BLS household survey, there were 21 million jobless workers who were trying to find jobs. There is absolutely no evidence that many of these unemployed could have found jobs, even if they were willing to spend 40 or 50 hours every week searching industriously for their next jobs.”

Indi Dutta-Gupta, co-executive director of the Georgetown Law Center on Poverty & Inequality: “If we want more people to return to work, we need to control this virus, ensure that people are safe at work, and guarantee child care and elder care. The $600 weekly unemployment benefit did not prevent more than 2 million people from returning to work last month. With a hole of roughly 20 million jobs, if anything, supercharged unemployment benefits prevent employers from receiving hundreds of desperate applicants for each opening — something that is an enormous waste of their and workers’ time and energy.”

Doug Holmes, president, UWC-Strategic Services on Unemployment and Workers’ Compensation: “There were studies that reviewed the 2008-2009 recession. One by the National Bureau of Economic Research and an update by AEI that showed that one impact is that fewer jobs are created.

“The CBO has recognized for decades that an extension of benefits results in an increase in unemployment duration. This is widely recognized by economists as a fundamental proposition. The amount of extended duration is impacted by a variety of factors.”

Bill Rodgers, chief economist, Heldrich Center for Workforce Development at Rutgers: “There is economic literature that shows when non-labor income (in this case UI Benefits) go up, the likelihood of searching for work goes down. The research also shows that when the support is about to go away and goes away, odds of searching for a job go up.

“Problem here is first the closing of the economy, such that there were no jobs to go to. Now there is the uncertainty of workplace safety, consumption that is slowly restoring itself, plus jobs that may never come back.

“It is hard to search for a job when the number is limited and the quality of those jobs has some uncertainty to them.”