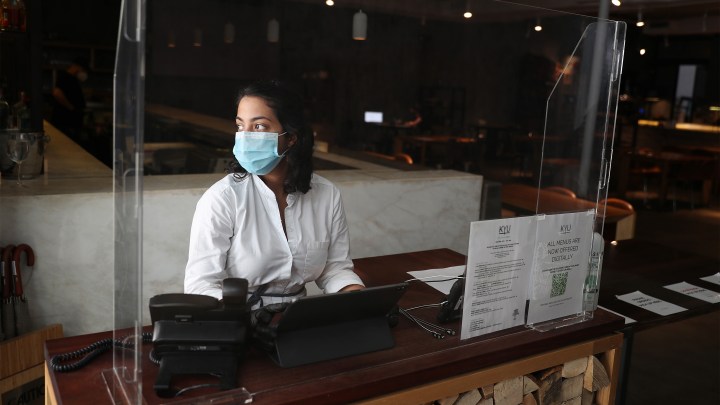 A hostess at a Miami restaurant waits for customers behind a partition. The expanded unemployment benefits helped small businesses make decisions early in the pandemic. Joe Raedle/Getty Images
Listen Now

When Sophie Blake closed her jewelry store in Virginia at the beginning of the pandemic, she said she had some difficult conversations with her four employees. Two she furloughed, and the other two she cut to part time.

When she first heard about the expanded unemployment benefits from the federal government, she encouraged her employees to apply.

“My first initial response was, go ahead and take it because this is extra support for you,” Blake said. “Because I don’t know when I will be able to rehire you back.”

Blake had applied for a Paycheck Protection Program loan at the time but wasn’t sure whether she’d get one. She also knew that one of her employees was asthmatic and expecting a child, and should probably stay away from work.

“For her, the decision was very clear,” Blake said.

The clarity of the expanded benefits helped businesses make decisions about their own futures early in the pandemic.

“Initially it was a lifesaver,” said Mark Frier, who owns three restaurants in Vermont and had to lay off about 130 employees when COVID hit.

Frier said the expanded unemployment benefits, which included an additional payment of $600 a week, let him focus on making plans to stay in business while ensuring that his employees would be taken care of in the meantime.

“We want them to succeed, and we want to help them grow their careers, and we hope to continue to employ them well into the future,” Frier said.

Small businesses, whether they’re restaurants or jewelry stores, also need to know that their customers can afford to come in and spend money, said Nathan Tankus, research director for the Modern Money Network and the author of Notes on the Crises.

“That’s the whole idea around these kinds of programs, that are supposed to sustain demand,” Tankus said. “That they have all these indirect, knock-on positive effects.”

The resurgence of infections in parts of the country is having a negative effect on demand. Blake reopened her jewelry store, but sales have fallen this month. Frier has brought back about 100 of the employees he laid off but said he wants that more robust safety net to be there if he has to close again.

“That’s the elephant in the room constantly with other restaurant owners that I talk to,” Frier said. “That fear that we’re going to have to re-close come fall, and then what happens?”

Frier got a PPP loan but said it’ll likely run out soon. And of his three restaurants, the one that’s doing the best is the one with the most outdoor seating. But in the fall, it’s going to get cold. Frier said he’s worried that then, he won’t be able to make enough money to keep his doors open.