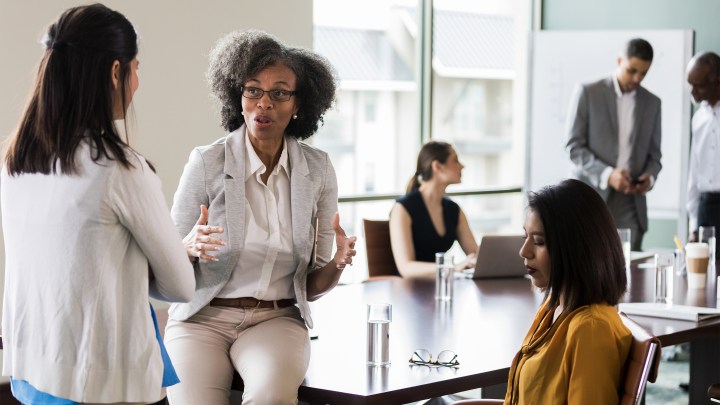 COPY
Even with progress toward making boardrooms more diverse, women hold less than 18% of corporate board seats in the United States, according to Deloitte. SDI Productions via Getty Images
Race and Economy

Even with progress toward making boardrooms more diverse, women hold less than 18% of corporate board seats in the United States, according to Deloitte. SDI Productions via Getty Images
Listen Now

Corporations have been taking a hard look at the diversity within their ranks, facing pressure from customers, their employees and shareholders.

Goldman Sachs is starting a new policy Wednesday: It won’t help a company with its initial public offering unless the company’s board has at least one diverse member. Next year, it will require at least two.

When calling for more diversity on corporate boards, Goldman Sachs is talking about people from chronically underrepresented groups — whether due to gender identity, sexual orientation, race or ethnicity.

When Goldman CEO David Solomon announced the change in January, he acknowledged to CNBC that his bank was pretty much going it alone.

“We might miss some business, but in the long run, this I think is the best advice for companies that want to drive premium returns for their shareholders over time,” Solomon said at the time.

Some companies have been trying to improve, according to Stephanie Creary, assistant professor of management at the University of Pennsylvania’s Wharton School.

Even with that progress, according to research from Deloitte, women hold less than 18% of corporate board seats in the United States.

“Those who manage assets like Goldman Sachs, they know that there’s only so much of a case you can make to motivate people and boards to increase diversity before you have to mandate it,” Creary said.

And changing boards takes time, said Peter Gleason, CEO of the National Association of Corporate Directors. He works with companies to diversify their boards.

“The fact of the matter is corporate boards don’t turn over very frequently,” Gleason said. “So you’ve got a great supply of people and little demand.”