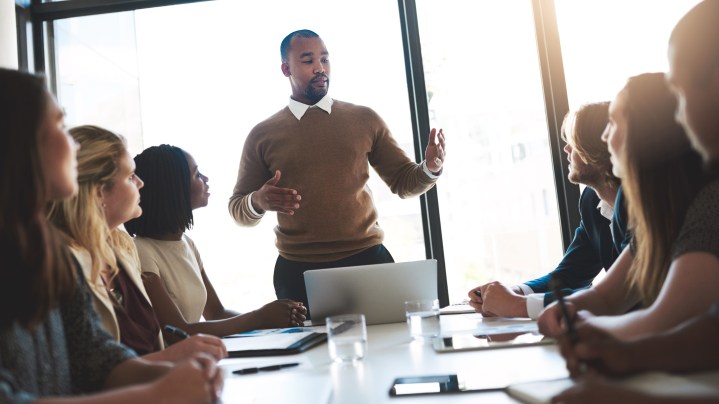 COPY
The number of directors from underrepresented racial and ethnic groups jumped by 25% last year, according to data from ISS Corporate Solutions. PeopleImages via Getty Images

The number of directors from underrepresented racial and ethnic groups jumped by 25% last year, according to data from ISS Corporate Solutions. PeopleImages via Getty Images
Listen Now

A group of 17 GOP-led states are supporting a legal fight against NASDAQ’s new board diversity policy, saying it amounts to a discriminatory quota system.

Under a rule approved by the Securities and Exchange Commission last August, the stock exchange will require listed companies to include at least one woman and one member of an underrepresented racial, ethnic or LGBTQ group on their boards of directors in coming years or explain why they haven’t.

Diversifying corporate boards of directors has been a slow process, but the last year has seen accelerated change.

If 2020 was the year of big corporate diversity pledges, 2021 was the year boards actually started to reflect those pledges, said Marija Kramer with ISS Corporate Solutions, which advises companies on corporate governance.

“I think 2021 was definitely a turning point. The market has embraced, I believe, diversity and the need for social reform,” she said.

Women now make up almost 30% of directors among Russell 3000 Index companies and the number of directors from underrepresented racial and ethnic groups jumped by 25% last year, according to ISS data.

The shift reflects not only the changing values of corporations but of investors, too, according to Yo-Jud Cheng, a business professor at the University of Virginia.

“You have large institutional investors, you’re thinking about retail investors, activist investors,” she said. “A lot of those groups are looking toward diversity on the boards of directors as a part of their decision process.”

Some large proxy investors, like ISS and Goldman Sachs, have said they’ll vote against boards that aren’t diverse enough. And there’s a growing consensus that companies need to rethink the way they’ve been recruiting directors, according to Peter Gleason, president and CEO of the National Association of Corporate Directors.

Gleason added that there’s been a surge of interest in programs that vet and certify potential directors who may not have those traditional experiences.