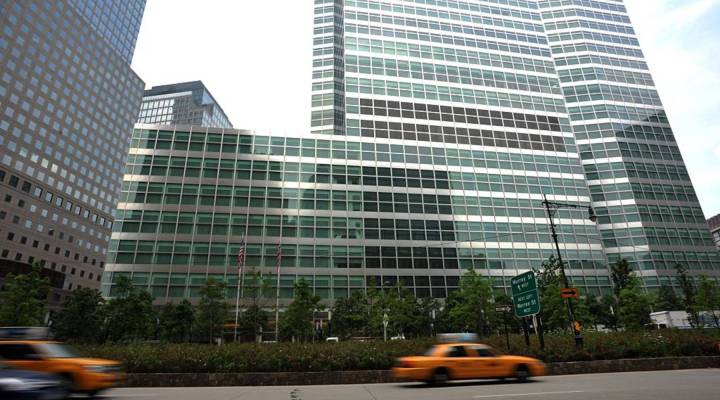 COPY
A view of Goldman Sachs' headquarters in lower Manhattan back on June 22, 2012 in New York. STAN HONDA/AFP/Getty Images

A view of Goldman Sachs' headquarters in lower Manhattan back on June 22, 2012 in New York. STAN HONDA/AFP/Getty Images
Listen Now

The powerhouse investment bank Goldman Sachs has just announced David Solomon will be its next CEO, succeeding chairman Lloyd Blankfein.

Solomon, 56, is the firm’s current president, rising through the ranks since he first arrived at the company. Following the financial crisis, he’s been a part of Goldman’s shift from trading toward consumer lending (in 2016, the company launched a direct bank called GS Bank, where consumers could open savings accounts).

He also has some unconventional hobbies for someone who works on Wall Street, spinning dubstep records under the name “DJ D-Sol.”

To find out more about D-Sol’s background, and why this announcement is so important, we talked to Charles M. Elson, corporate governance expert at the University of Delaware. Below is an edited transcript of the interview.

So why is it that we care that Goldman Sachs is getting a new CEO? There are lots of banks on Wall Street.

Goldman Sachs has really been considered one of the preeminent investment banks in the United States for many, many years. They are the absolute top of their field and have been for a long time. You also have to remember that Goldman Sachs has had a huge influence over American finance policy. You can count several of the secretaries of the Treasury, including the current secretary of the Treasury, that came out of Goldman at one time or another. And that’s why whoever runs it, it is important to the rest of us who happens to be in charge.

Who is David Solomon, and what does that tell us about the direction Goldman Sachs is going in?

He does rock ‘n’ roll DJ’ing on the side, which is particularly interesting. I’m really curious as to what choice of an artist he picks. But the key is he didn’t start at Goldman. Goldman historically brought people from inside, all the way up. Goldman was a culture. And anyone from outside the culture never came in from outside the culture. You grew up there. He did not. He had been at Bear Stearns and then came over in the late ’90s. Lloyd Blankfein did the same thing, though Lloyd Blankfein had been a lawyer and then went to a small trading outfit that was acquired by Goldman. This fellow actually came to Goldman at sort of the midpoint of his career, and that’s unusual at Goldman. It’s a very in-house sort of culture. Now, I think it signals No. 1 that Mr. Blankfein must have liked him because Mr. Blankfein does run that company. I don’t think it’s a company that appears from the outside to be particularly board-driven. It seems to be driven by the current management. You can expect more of at least the same direction that Mr. Blankfein was taking the company.

Goldman Sachs’ trading division has been less profitable ever since the recession. And so it’s been sort of pivoting towards more consumer lending. What’s that going to look like and do you think that David Solomon would continue that?

He’s obviously been a significant part of that direction — a de-emphasis on trading and an emphasis obviously on consumer banking. That’s something the chair of the bank, Blankfein, has pushed. I would expect that it would continue. On the other hand, once someone becomes a CEO and their predecessor retires or disappears, they’re on their own and no telling what direction they go in. If you think about it, he was an investment banker. And getting into the consumer business is not something traditional investment bankers would have thought of, nor traders. So who knows. The old joke: This isn’t your father’s Oldsmobile, this isn’t your father’s Goldman Sachs. It’s a different kind of place, and they will — I assume — opportunistically move into areas where they see greater shareholder returns.

If you’re curious, you can listen to Solomon’s remix of Fleetwood Mac’s “Don’t Stop”: