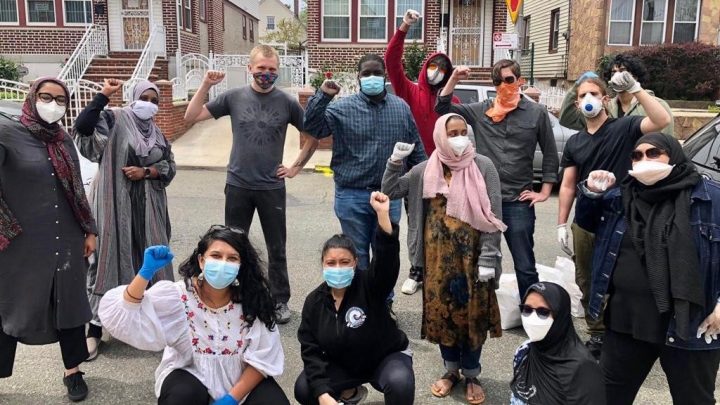 She’s been an activist with Black Lives Matter since she was in high school in Louisville, Kentucky, but this time she feels like she can’t be out there.

“I haven’t been able to really get out as much as I wanted to because of COVID-19 and the health risks that would pose to me and the people I live with,” said Mason, now a student at New York University. “I felt like I wasn’t doing enough.”

She donated to some bail funds to support the protesters, but then saw messages from organizers that they had raised plenty of money, so she started encouraging people on social media to donate to mutual aid funds instead. The message went viral.

“Bail funds are only a small part of a way to support a community, while mutual aid funds can help in so many different ways, whether it’s helping people with groceries, or helping people pay for medical bills, or helping someone make their rent,” Mason said.

Many communities of color, immigrants and activists have been looking out for each other this way for years, often out of necessity. But the idea of mutual aid, and the term itself, have become much more widespread since the pandemic began. Dozens of new groups have popped up around the country just in the last few months, and those that already existed have seen a surge in support. The protests have brought increased attention and donations to mutual aid networks, too, many of which have raised tens of thousands of dollars.

Chloe Seibert had never heard the term mutual aid before the pandemic. But when New York City started shutting down, she learned that a bunch of her neighbors in Queens were banding together to find ways to support the community — buying and delivering groceries, picking up prescriptions and doing other errands for those who are elderly or immunocompromised — and she started volunteering immediately.

These days, she spends a lot of her free time connecting people in her neighborhood who need help with those who are able to give it through the Astoria Mutual Aid Network.

“I think the pandemic revealed to a lot of people who had the privilege of not being aware of this before the gaps in care in the communities that we live in, and the gaps in support for people who are more vulnerable in these communities,” said Seibert, who grew up in Astoria.

With more than 100,000 people dead from COVID-19, much of the country shut down for weeks, and around 40 million people unemployed, most people in the U.S. have either been personally affected by the pandemic or know someone who has, which has made many want to help.

“Now more than ever I think people are realizing that community support is really necessary,” Mason said. “Our government has only given people one $1,200 check to somehow make ends meet since this pandemic started, despite the fact that millions of people have lost their jobs and don’t have a way to make ends meet. When you think about it in that way, you start to realize that the only way that we’re going to be able to get through this is through community-based initiatives like mutual aid funds.”

Thahitun Mariam has seen all of that first hand in the Bronx where she lives. Early on, she saw her neighbors getting sick, losing their jobs and struggling to pay rent.

So in April, she started the Bronx Mutual Aid Network with a couple of friends. Since then, the group has grown to include more than 100 volunteers and raised more than $30,000.

“It was born out of necessity,” said Mariam, a long-time community organizer.

“They’re all just really energized because of the fact that it is as direct impact as it gets,” she said. “It’s as grassroots as it gets … we can give direct financial assistance, and I think sometimes with organizations they might have certain limitations on doing that sort of work.”

Mutual aid has, at various points, been a “major, major part of American history,” said Erik Loomis, a labor historian at the University of Rhode Island.

In the 19th and early 20th century, new immigrants to the U.S. often formed mutual aid societies to take care of one another. So did the labor movement. And in the 1960s and ’70s, the Black Panthers stepped in and provided mutual aid to Black communities around the country, feeding and educating kids, providing free medical care and helping people with other basic needs.

To see so many people turning to mutual aid now during the pandemic and the protests, Loomis said, is both heartening and disheartening.

“The rise of mutual aid in very recent times is closely related to the fact that you have a society that’s once again failing its citizens. Where a social safety net is being cut, where people don’t feel like they have anywhere they can go, where they don’t feel like the government is going to provide what it once did,” he said. “It becomes a way that I can express solidarity, especially in a world where I’m not supposed to leave the house.”

It has also become a way for people to express solidarity with protestors if they don’t feel comfortable taking to the streets themselves in the midst of a pandemic.

“I think a lot of the conversation is, if you cannot show up to protest on the front lines, that’s completely OK, but support the work of those who are serving communities of color and really providing direct services and assistance at this time,” Mariam said. “And mutual aid work is definitely that.”

Chanelle Helm of Louisville, Kentucky, has been doing mutual aid work her whole life, though she hasn’t always called it that. Growing up Catholic, and with a grandmother who was a social worker, it was just always a part of her world.

Now, in her role as a lead organizer of Black Lives Matter in Louisville, mutual aid and activism go hand in hand.

“We always do this, a lot of us that are in the streets with our folks,” she said. “We’re always making sure they have what they need and raising funds in different ways.”

As soon as the pandemic started, she helped set up a coronavirus-specific mutual aid network for Louisville. And she’s noticed a spike across the board — in need, in donations and in volunteers.

“I don’t want people just to donate,” Helm said. “I want you to be able to put in that labor, too.”

Over the last couple of months, Louisville Mutual Aid has been distributing kits to people in the community with food, medicine, cleaning supplies and water. They’re aiming to get books and toys to families with kids. And they’ve been giving out daily meals in the community, too. But in the last couple of weeks, donations have stalled, so much so that they couldn’t afford to do that anymore.

Then the protests began, more people around the country started looking for ways to support the Black community, and mutual aid groups got a lot more attention on social media and in the press. In the span of about a day this week, Louisville Mutual Aid got more than $80,000 in donations.

With so much attention now on mutual aid, Helm said she wants to be sure people are thinking and talking about the bigger issue — why it’s necessary in the first place.

“We’re taking care of our people because of an acute infrastructure malfunction,” she said. “The system is completely …  not there. It is gone. It’s not broken … it’s completely gone.”