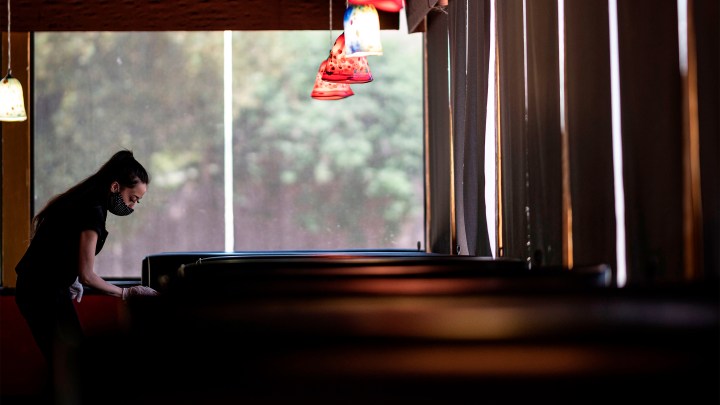 COPY
A waitress disinfects a table at a restaurant on May 5 in Stillwater, Oklahoma. One requirement of the Paycheck Protection Program is to bring back all full-time-equivalent employees. Johannes Eisele/AFP via Getty Images
COVID-19

A waitress disinfects a table at a restaurant on May 5 in Stillwater, Oklahoma. One requirement of the Paycheck Protection Program is to bring back all full-time-equivalent employees. Johannes Eisele/AFP via Getty Images
Listen Now

One of the big reasons why Paycheck Protection Program loans are in such high demand is that the loans can be forgiven by the government. However, there are requirements for that forgiveness component of the program. For instance, a business has to bring back its full-time-equivalent employees for the loan to be fully forgiven. Many businesses that received PPP loans are finding that meeting those requirements can be a tricky process.

Bringing headcount back up to pre-crisis levels wasn’t so easy for David McBride, an optometrist who runs a vision clinic in Portland, Oregon. He applied for a loan after the state shut down nonemergency medical care in March.

“We weren’t seeing patients,” McBride said. “It doesn’t do any good to have my staff sitting in here doing nothing.”

So McBride went to his accountant.

“And I’m like, well, maybe. You might have to pay them to sit at home,” said Lorilyn Wilson, who owns an accounting firm called Collective. She said a lot of her clients are grappling with the forgiveness requirements. “It’s like, ‘Now we have the funding, so what’s the best way we can maximize that forgiveness?'”

Businesses have to spend 75% of their loans on payroll, which can be a challenge if they’re operating with limited staff. Luke Wake is an attorney with the National Federation of Independent Business.

“Some people are going to begin giving bonuses — incentive pay for people who actually are reporting when they’re operating on that skeleton crew,” Wake said.

One complicating factor is that businesses have eight weeks to use the money starting the moment they receive the loans. Wake said many businesses are already a few weeks into that eight-week window.

“I’ve heard from a lot of people who’ve said ‘I wish that I had some flexibility to adjust that a little bit, so that it didn’t necessarily begin to run the moment I got the money from the bank,'” Wake said.

It can also be difficult to recall employees when many are getting unemployment insurance, which includes an additional $600 a week in emergency pandemic benefits.

This month, the Treasury Department said loans can be forgiven if businesses offer employees their jobs back. But doing so could mean those employees no longer qualify for unemployment insurance.

“If you’re bringing them back into situations that are unsafe, or you’re forcing them to give up their unemployment so you can hit your PPP, I think that’s a dangerous situation,” Hetrick said.

Back in Portland, Oregon, the government opened up nonemergency care last week. McBride brought most of his employees back, and he thinks he’ll qualify for loan forgiveness. In the meantime, he’s ramping up safety measures around the clinic.