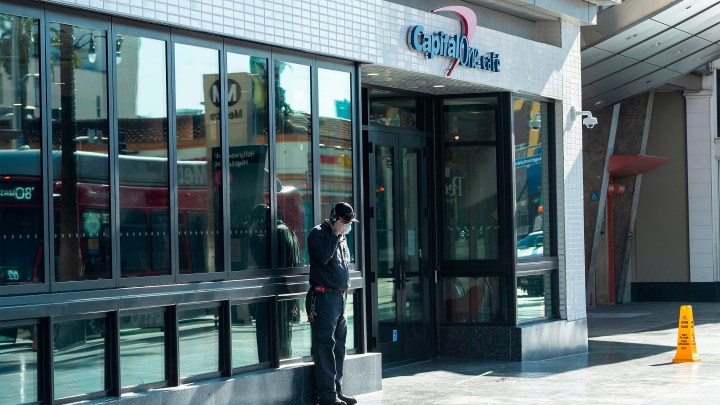 COPY
A bank branch in Los Angeles. Banks processing PPP loans are seeing new business from those customers and generating fees from the government. Valerie Macon/AFP via Getty Images
COVID-19

A bank branch in Los Angeles. Banks processing PPP loans are seeing new business from those customers and generating fees from the government. Valerie Macon/AFP via Getty Images
Listen Now

There’s a deadline coming up at the end of this month to apply for the Paycheck Protection Program. The Treasury says there’s still $130 billion in funding available.

Right now, many businesses that already received loans are starting to work on getting them forgiven. That’d be a big benefit for the hundreds of thousands of businesses that received them. But there’s another big beneficiary of the PPP: the banks that process the loans.

When the program started, Bay State Savings Bank in Massachusetts focused first on processing loans for its existing clients. Then a couple of weeks in, new customers started showing up.

Peter Alden is the bank’s CEO.

“Once the opportunity opened up for noncustomers and new customers, it’s been very beneficial to us,” Alden said.

The bank has about 60 new customers so far, Alden said. And those people are starting to consider the bank’s other services.

“We have had a number of new depository accounts opened up, both for businesses and personally,” Alden said. “Also, some are talking already about moving their mortgages to us, etc.”

Banks that process these loans are also starting to see another benefit: the fees they receive from the Small Business Administration.

“As a matter of fact, a lot of banks within the last couple days are beginning to receive that,” said Chris Duncan, senior loan officer at La Salle State Bank in Illinois, which received its fee income Friday.

Banks get between 1% and 5% of the loans. Duncan said that can add up. And the money’s coming at an important time because many businesses have been deferring payments on non-PPP loans.

“They’ll come out of that deferral period and eventually be required to start making payments again,” Duncan said. “Then the question will be, can they? And what level of delinquency will we see in our loan portfolios as a result of all this?”

For now, banks are focusing on helping customers apply to have their PPP loans forgiven. Nathan Rogge, CEO of the Bank of Southern California, said it can be expensive to monitor loans, do the accounting and send out statements.

“All of that has internal costs to it. So we’d like to see as many of these forgiven as possible,” Rogge said.

Plus, the interest rate on these loans is only 1%. Borrowers have up to five years to pay them back. Rogge said that’s not sustainable.

“That’s a long time to be beholden to that thin of a margin,” he said. The relationships he’s built with new and existing clients, Rogge added, will help smooth out that forgiveness process.

In the end, he expects, most of his clients’ PPP loans will be forgiven.